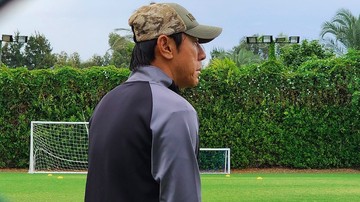 Shin Tae Yong (STY) very angry with the captain Indonesia U-20 National Team Barnabas Sobor which was continued to all players during the break against Moldova U-20 in the second leg.

The U-20 Indonesian national team drew 0-0 against Moldova U-20 in the second leg test match at the Emirhan Stadium, Turkey, Friday (4/11) night WIB.

During the break, STY was angry with his players for not playing as expected. STY’s first anger was directed at Barnabas Sobor, who at that time was believed to be the team captain.

Indonesian U-20 national team defender Barnabas Sobor became the first player to be scolded by STY for making several mistakes in the first half which resulted in Indonesia’s defense being threatened.

Moreover, at that time he was trusted by Shin Tae Yong to be the captain of the U-20 Indonesian national team in the first round.

“If you don’t wear the captain’s armband, it’s okay. You try to talk, what were you doing in the first half?” asked STY in an angry tone quoted from YouTube PSSI TV, Saturday (5/11).

After scolding Sobor, Shin Tae Yong then became furious with all the players during the break.

“What you do in training with different matches. Every passing forward you will lose the ball, why do you want to play the ball like this,” said Shin Tae Yong.

After being scolded by Shin during the break, the appearance of the U-20 Indonesian National Team in the second round got better coupled with the inclusion of a number of players. However, until the match ended, the Indonesian U-20 national team still struggled to break into the Moldova U-20 goal so the match ended 0-0.

Demands Minister of Health and Head of BPOM to Resign, Mass of Labor Holds Demo at Ministry of Health Office Today |nitoba.com

Martial talks about the best player at Manchester United: Not Ronaldo