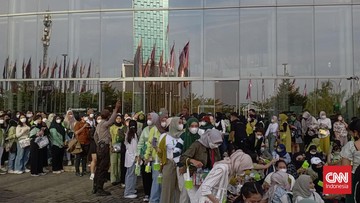 Sarly said that his party had agreed with Dyandra Global as the promoter, that the concert would be dissolved if 10 people fainted during the show.

“Like yesterday’s commitment, if there are still fainting even more than 10 or 10, we will still stop or stop the activity,” said Sarly at ICE BSD, Saturday (5/11).

“That’s what the EO must do. As much as possible they can organize this activity,” he continued.

Not only that, the police also increased the number of personnel on duty at the concert site. The police also appealed to the organizers to provide a schedule of breaks in the middle of the concert.

“Then there will be more medical teams, both from the EO itself and the Resort Police. We even asked that there be a time lag for rest,” said Sarly.

Meanwhile, the second day of NCT 127’s concert is currently taking place at ICE BSD. Based on the released schedule, the concert has started at 14.00 WIB.

However, fans of NCT 127 aka NCTzen were also observed to be still around the concert location. They seemed to sell various attributes of NCT 127 to distribute freebies in the form of snack packages to photopacks of the boygroup members.

News : Due to Pay to Win, YouTubers Can’t Find a Balanced Opponent in Diablo Immortal | GameBox