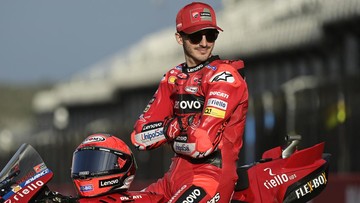 Ducati rider Francesco Bagnaia feel that something is limiting him to perform optimally in Valencia MotoGPSunday (6/11).

In the first free practice session, Bagnaia only placed 17th. There is a nervousness that makes him not perform so optimally in the pursuit of the title this season.

The continuation in FP2 Bagnaia could improve his speed so that he penetrated the top 10 position. At the same time his main competitor for the title Fabio Quartararo could go even faster.

Only Bagnaia wasn’t sure what the limit was. “Of course, there was something that limited me, but not so much today. I didn’t feel good at the start,” he said Crash.

“We’ve changed a lot [motor]. The bike is quite different compared to last year and at this track I feel a little bit more. In braking, I struggled a little more than usual,” he said.

There are three main things that Bagnaia considers not so optimal from the FP1 and FP2 sessions. One of the problems is braking. Though usually braking goes very well throughout this season.

“Today was not stressful, but definitely not the easiest. At the start of this morning in FP1 the bike didn’t work well. We struggled with the wind, struggled with braking and also with grip,” he said.

“I started this morning with a bit of difficulty and I improved my feelings during the session, but it wasn’t enough. This afternoon [masih] the same,” said the 25-year-old Italian.

Bagnaia currently leads with 258 points or a difference of 23 points with Quartararo. Pecco would have finished in 14th position if Quartararo was able to win at the Valencia MotoGP.

Garuda Promises to Obey the Rules regarding Airline Ticket Prices

PDIP Pockets 3 Names of Candidates for Acting Governor of DKI, including the Regional Secretary Marullah