A Wadas Resident Gets IDR 8 Billion in Compensation from BPN 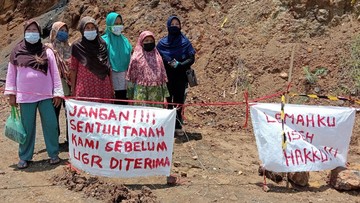 Regarding the remaining parcels of land that have not been released, said Andri, his party will continue to approach and socialize. The total target is 617 fields so that currently only 41 fields are being approached.

“This is still an approach, before the end of the year it has been measured. I am confident with the description because facts and evidence can be seen,” he said.

Previously, a number of Wadas Village residents who were originally against mining have now supported and received compensation from the government.

One of them, Zaenal Arifin. He had refused to acquire the quarry land. However, now he receives UGR of IDR 8 billion from his three plots of land.

“Yes, I used to strongly reject it. Now I just follow the many (the majority),” he said.

Another resident, Khoirul Riza, admitted that he had always refused to acquire the quarry land in his village for the construction of the Bener Dam. In fact, he often participated in demonstrations against the earthquake with Earthquake.

“Yes, I previously refused because it was based on my own considerations. In addition, to add experience and information from those there and what kind of parties here,” he said after receiving the UGR at the Wadas Village Hall.

He said that currently he prefers to relinquish his land for the common good. In fact, he did not question how much the UGR was.

He received UGR of IDR 3 billion from his land. The plan is to use the money to open a shop.

“I accept it because that’s the way it is. When it comes to compensation, I don’t think much about it,” he said.

A number of Wadas residents who are members of the Wadas Village Nature Care Community Movement (Gempadewa) continue to fight against all planned andesite mining activities in the area where they live.

Later they sued the Director General of Coal Minerals at the Ministry of Energy and Mineral Resources to the Jakarta Administrative Court regarding the issuance of a mining permit for andesite material in Wadas for the Bener Dam, Purworejo.

Daniel Al Ghifari as the Head of the Advocacy Division of LBH Yogyakarta who is a member of Solidarity for Wadas, said that the lawsuit was filed with the court on Monday (31/10).

The mining permit is stated in letter No.T-178/MB.04/DJB.M/2021 dated July 28, 2021, which was signed by the Director General of Mineral and Coal of the Ministry of Energy and Mineral Resources, Ridwan Djamaluddin.

Earthquakedewa demanded the relevant officials to stop the plan for the inventory and land identification phase 2 in Wadas Village; Stop mining plans; stop all stages of land acquisition for mining.

Be Careful, Digital Footprints on the Internet Can Trigger Cyber ​​Crime |nitoba.com

125 Ha of Agricultural Land Inundated by Floods in Probolinggo