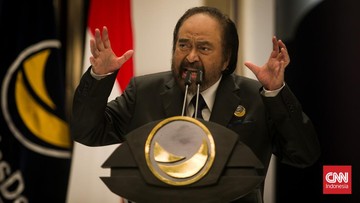 Surya Paloh emphasized that the relationship between NasDem, Anies’ candidacy, and the KPK were on their own.

“This is a friend asking if it’s related to the KPK no here? How do we know. Because all I know no is related. This means that I really don’t see any connection between NasDem, Bung Anies’ candidacy, and then the KPK. Everyone goes their separate ways. That’s all that’s clear,” said Paloh at the NasDem Party DPP Office, Gondangdia, Central Jakarta, Monday (3/10).

“This is the day we declare the official presidential candidate for the NasDem Party. There are various views, perceptions, allegations, and so on. That is life and accept life as it is,” he continued.

On that occasion, Paloh also predicted that slander and betrayal would attack his party after carrying Anies.

Paloh reminded his cadres to prepare for these attacks.

“Well, how to win? Now, the answer to this question is easy, but to make it happen, strategy is needed, hard work is needed, patience is needed. Get ready for NasDem, not only to get flattery, slander, shirk, envy, betrayal, now it will faced by Nasdem,” explained Paloh.

“Once again I say Nasdem must be prepared to face such a situation,” he continued.

He believes that the best work and prayers can open the eyes of the people’s hearts from various elements to vote for Anies.

Matters in the KPK

The case of alleged corruption in the administration of Formula E by the DKI Jakarta Provincial Government at the Corruption Eradication Commission (KPK) continues. It is known, this case began with a public report in September 2021.

Anies himself was present and underwent an examination at the KPK on Wednesday (7/9). He was questioned for approximately 11 hours regarding the implementation of Formula E in Jakarta some time ago.

He admitted that he came to explain the process of organizing Formula E which is being investigated by the KPK. Anies believes his statement can help the KPK.

“I want to say, I am very happy to be able to help the KPK again in carrying out its duties,” Anies explained at the KPK Red and White Building, Wednesday (7/9).

Most recently, the KPK has conducted a case or exposure in the investigation of Formula E in Jakarta.

For information, exposure is a common thing that the KPK usually does in open investigations. The exposure is intended to describe the results of information gathering by the investigative team in order to obtain suggestions and input from all parties participating in the forum, including the KPK leadership.

As for the results, there is not enough evidence in the Formula E case to proceed to the investigation stage, aka no suspects have been named.

“In the KPK’s internal process, every case handling is carried out by exposure or case titles,” said Head of the KPK News Section, Ali Fikri via written message, Monday (3/10).

Leading Red and White Raising in the Berau Sea, Berau Deputy Chief of Police Is Mistaken as ‘Inspector Vijay’ |nitoba.com

Can the ITE Law Snare Alfamart Employees? This is what the observer said |nitoba.com