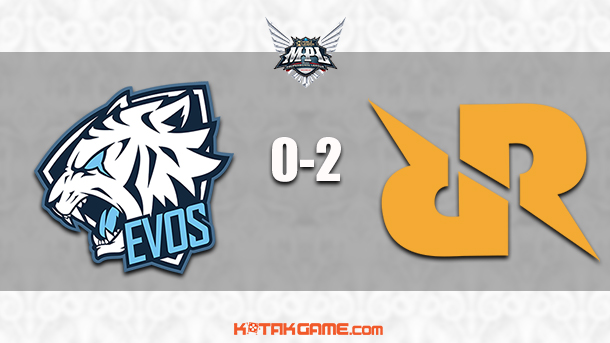 The closing match this weekend presented a super hot duel, namely El Clasico between RRQ Hoshi and EVOS Legends. Both teams need a win to ensure different tickets, namely EVOS Legends to the playoffs while RRQ Hoshi goes to the upper bracket. Unfortunately, EVOS Legends had to give up their hopes of qualifying for the MPL Indonesia Season 10 Playoffs because they had to admit the superiority of RRQ Hoshi.

The words that came to mind in the first game were probably super wow. How not, in this first game, both teams played high tempo and traded attacks, Valentina from Tazzz could be said to be one of the scary specters because she could copy the ulti of Faramis and Atlas. RRQ Hoshi had dominated in the early to mid game. However, EVOS Legends responded with attack after attack in the mid to late game. At its peak, the struggle for the fourth Lord became the decisive victory in this game. Ulti Flicker from Vynnn makes EVOS Legends have to lose Tazz and lose the war. RRQ Hoshi finally managed to close this first game with a win, the score 1-0.

The domination was continued by RRQ Hoshi in the second game. RRQ Hoshi who can be said to have won the draft managed to make EVOS Legends confused to launch an attack. The Atlas and Faramis combo is again shown by RRQ Hoshi. As a result, they managed to prevent EVOS Legends from qualifying for the MPL Indonesia Season 10 Playoffs because they had to lose to RRQ Hoshi with a score of 2-0.

Don’t forget to take part in the Giveaway from KotakGame. Check out the video below:

If you want to send articles, collaborate events and place advertisements (adverstisement) you can email the editor[at]kotakgame.com or Hotline (021) 93027183

News : Google Officially Introduces AI That Can Be a Story Writer and Editor | GameBox

There are many symptomatic diseases similar to monkeypox, this is the difference | nitoba.com

The Story of Workers Amid Crowded Aice Boycott Hashtags on Twitter