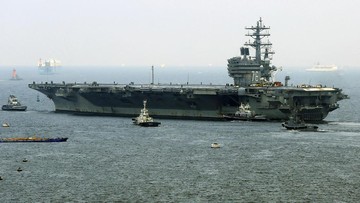 “The deployment of the aircraft carrier USS Ronald Reagan to Busan demonstrates the US-South Korean power alliance,” the South Korean ministry was quoted as saying. AFP.

News agency Yonhap reported that the ships would be used for joint military exercises on South Korea’s east coast.

In the joint exercise, the nuclear-powered submarine USS Annapolis is also expected to participate.

Washington is Seoul’s main security ally. The US even has about 28,500 troops in South Korea.

The two countries have been conducting joint exercises for a long time. They claim the drills are a defensive measure, but North Korea considers them a threat to invade their country.

They returned to intensive joint exercises because North Korea is increasingly testing missiles.

Pyongyang itself has tested nuclear weapons six times since 2006. The last and most powerful test occurred in 2017, which the North claimed was a hydrogen bomb.