The Impact of Abrasion in Takalar, The Tomb of the King of Gowa is Threatened to Disappear 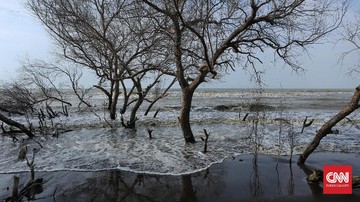 A number of royal family tombs Gowa The 16th Sultan Hasanuddin at the Kassibumbung Cemetery Complex in Punaga Village, Mangarabombang District, Takalar Regency, South Sulawesi, is in danger of being eroded. abrasion beach.

The location of the royal tomb complex of the King of Gowa, Sultan Hasanuddin is only about 10 meters from the beach. The condition of the tomb is currently very alarming and is in danger of being lost.

“So in the tomb there is the tomb of Sultan Hasanuddin’s mother, including his wife, grandfather, grandmother as well as his aunt and uncle. Everything is buried here and due to abrasion it is threatened to disappear,” said Punaga Village Head, M Syarifuddin Sore, Friday (23/9).

As a result of the coastal erosion that occurred, said Syarifuddin, it had an impact on two hamlets in Punaga Village, namely, Punaga Hamlet and Malelaya Hamlet.

“The distance from the two hamlets due to abrasion is approximately four kilometers and a number of public facilities such as roads are almost cut off,” he said.

The public cemetery in Punaga Village, Manggarabombang District, Takalar Regency, South Sulawesi, was badly damaged due to the impact of coastal abrasion.

The impact of the abrasion was that dozens of graves of residents were lost and a number of human bones were scattered on the shoreline.

“We find many human bones on this beach. The bones are scattered. This is because many graves or graves have been lost due to the impact of abrasion,” said Syarifuddin Sore.

This condition, said Syarifuddin, was very concerning before the condition of the land was still far away. However, now the shoreline is getting closer.

“If we look at the land first, it is still far out, but since the beach abrasion hit, 40 meters of land on the shoreline has disappeared,” he explained.

Syarifuddin hopes that the regional and provincial governments to the center can immediately intervene to help residents so that the coastal abrasion does not have a worse impact.

“We hope that the government can build a wave-retaining embankment so that coastal abrasion does not have a severe impact,” he said.

Stabbed a dozen times, this is the current condition of the author of the Satanic Verses Novel Salman Rushdie |nitoba.com