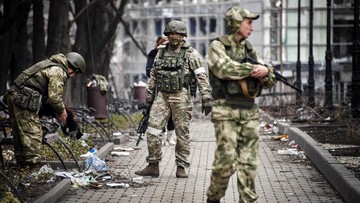 Ambassador Ukraine for Indonesia, Vasyl Hamianin, mentioned the decision Russia deployed 300 thousand reserve troops to his country as a form of desperation from the Red Bear Country.

Hamianin also revealed that Russia had recruited criminals from prisons to citizens who were choking on debt as reservists.

Hamianin believes that the reservists deployed after President Vladimir Putin signed the mobilization decree after the defeat of the Red Bear Country at several points in Ukraine amounted to 1 million troops. Or not 300 thousand as stated by any party.

However, Hamianin believes it is a form of desperation that Moscow has not been well prepared since the first day of its invasion of Ukraine, February 2022.

The evidence, he continued, was the finding of expired rations since 2015 and also worn-out war equipment worn by Putin’s soldiers. Hamianin said many of them wore World War II-era equipment, not bullet-proof vest models.

“Very outdated. But of course, the air force, the special operations regiment, they are better equipped. But, the majority are like subpar,” he explained.

The Kremlin, Hamianin continued, is now starting to recruit criminals from prisons, as well as involving people who are in debt, alcoholics, and in an attempt to invade Ukraine.

“What does that mean, they are starting to run out of human resources,” he suggested.

Not only human resources, according to Hamianin, Russia’s ammunition supply has also started to run low. They started importing munitions from North Korea, including drones from Iran.

“And don’t forget, winter in Ukraine can be minus 20-30 (degrees Celsius). Sometimes it rains, sometimes it snows. So, just imagine 300 thousand troops without adequate ammunition, equipment and weapons. And without a place to live, because easy to understand. We control the area using drones from satellites,” he explained.

“We know you (Russia) will mobilize a million people and you will be finished,” he continued.