0
SHARES
0
VIEWS
Share on FacebookShare on Twitter
Saibani “fl1pzjder” Rahmad, Captain of BOOM Esports Valorant has announced he has been allowed to search for a new squad for the partnership team that joins the Valorant 2023 franchise league.

fl1pzjder himself announced on his personal twitter and was forwarded by BOOM Esports. 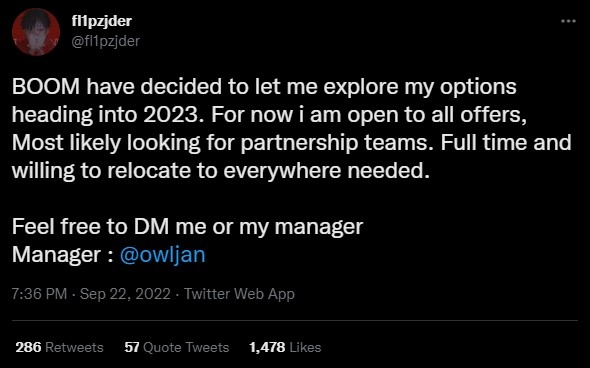 fl1pzjder or Bani is an Indonesian player with international quality. As the Leader of BOOM Esports Valorant managed to defend the team in Challengers ID stages 1 -2 2022 to Champions 22 in their first and greatest international tournament they have ever been through.

» BOOM Esports CEO’s response to the Valorant Franchise League!
» Even though Indonesia is only represented by 1 team for the 2023 Valorant Franchise…
» [VIDEO] Pak Pulung Reveals Ping in MPL until Loud Wins Champions!
» LOUD comes out as Valorant Champions 2022 Champion, After Defeating Optic Gaming!
» VCT 2023 Format Experiences Major Overhaul by Riot

Even though in the match they were forced to go into overtime, he could control his team to stay focused and not get carried away. fl1pzjder also has soft-skills in English, making it possible to be acquired by a non-Indonesian squad.

BOOM Esports also supports fl1pzjder’s decision to look for another team. Even the CEO of BOOM Esports is also promoting on twitter.

Who knows, later on, fl1pzjder may be added to the RRQ team’s roster as Indonesia’s representative in the Pacific region.

However, if fl1pzjder chooses to be acquired by a team outside of Indonesia, they don’t mind as long as they always play. Goodluck fl1pzjder!

PHOTO: Wreck of an ancient merchant ship found in the Sea of ​​Israel

Jokowi on Fuel Price Subsidy: What If The State Budget Is Not Strong?