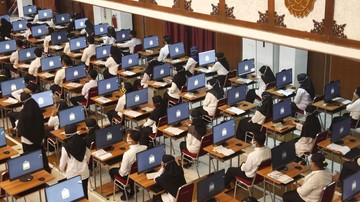 Ministry of Education, Culture, Research, and Technology (Kemendikbudristek) mentions that there are two patterns for the recruitment of Government Employees with an Employment Agreement (PPPK) guru 2022.

Acting Director General of Teachers and Education Personnel of the Ministry of Education and Technology Nunuk Suryani said the two patterns were closed and open patterns.

In a closed pattern, the government will select first aid teachers for study groups (rombel) or classes that have been filled by non-ASN teachers.

“It means that there are already teachers there,” said Nunuk in the Merdeka Gathering which was broadcast online on Thursday (22/9).

Meanwhile, in the open pattern, the Ministry of Education and Culture will select first aid teachers for study groups that do not have non-ASN teachers.

“Or rombel that is still empty,” he said.

The three priorities for teacher PPPK applicants have been regulated in the Decree of the Minister of Education and Technology Number 349/P/2022 concerning Technical Instructions for the Implementation of the Selection of Candidates for Government Employees with Work Agreements for Teacher Functional Positions in Regional Agencies in 2002.

The first priority are participants who have participated in the PPPK selection for JF Guru in 2021 and have met the Threshold Value, but have not yet received a formation.

The second priority is THK-II which is not included in THK-II in the category of priority I applicants.

The third priority is non-ASN teachers who are not included in the non-ASN teacher category of priority I applicants in educational units organized by local governments and have teaching activities for a minimum of three years or the equivalent of six semesters at Dapodik.

It is known, the Ministry of State Apparatus Empowerment and Bureaucratic Reform (Kemenpan-RB) has determined as many as 530,028 national civil servant (ASN) needs in 2022 at the PPPK level. Of that number, as many as 319,716 vacancies were opened specifically for PPPK Teachers.