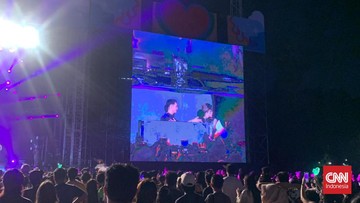 Jackson Wang ended his performance on the first day of WTF 2022, Friday (23/9), by singing with Afgan. Both of them sang the song MIA which was released by Afghanistan last year.

This presence was the final surprise for the audience. MIA was performed by Wang and Afgan as an encore or a song outside the set list at the request of the audience.

“Thank you Afgan for being here,” said Wang with a warm hug to the collaborator.

“I love you all!” closed Wang at the end of the set while saying goodbye to the audience in Indonesian.

Today, Jackson Wang finally returned to greet Indonesia through his appearance at WTF. He appeared as the last artist to hit the WTF stage, aka the main stage of the event.

Appearing with stunning visuals, Wang at the same time answered the promise of the organizers who ensured a special and extra appearance from him.

Wang was present with dancers with lively choreography, as well as optimal visualization and sound arrangements.

Police Ready to Face Sambo’s Lawsuit regarding Dismissal at PTUN