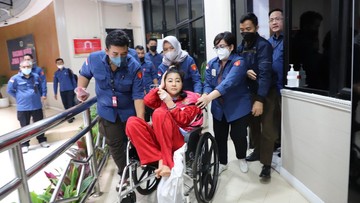 Attorney General’s Office (AGO) appointed the President Director of PT Misi Mulia Metrikal (MMM) Hasnaeni Moein or known as ‘Wanita Emas’ as a suspect in the alleged corruption of funds within PT Waskita Beton Precast in the 2016-2020 period.

At the AGO, Hasnaeni’s transfer was colored by ‘drama’ after he screamed hysterically as he was about to be taken into the prisoner’s car to the Salemba detention center. Hasnaeni was seen wearing a red suit and covered in a vest for the Attorney General’s office.

At that time, Hasnaeni did not stop screaming hysterically. Hasnaeni, with shrill screams, even had a chance to rebel when officers from the Attorney General’s Office carried him into the detention car.

Furthermore, Kristadi as General Manager of PT WBP made a payment invoice so that it seemed as if he had purchased materials from PT MMM. So, based on a fictitious claim from PT MMM, PT WBP handed over money worth Rp. 16,844,363,402.

The National Police Chief Attends the Consolidation of Muhammadiyah Youth at UMM |nitoba.com

Winner of the AFF U-16 Cup, the Indonesian National Team will be sent to Europe