Ex-President: Russia Can Use Nuclear To Defend Ukraine’s Territory 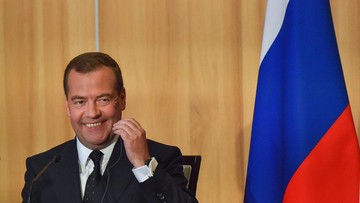 former president of Russia, Dmitry Medvedevsay Russia could issue strategic nuclear weapons including nuclear in order to defend the territory Ukraine who had only joined his country since the Moscow invasion took place.

Medvedev said the Russian military would protect with all its might all the new territories Russia annexed from Ukraine.

“Russia announced that not only mobilization capabilities, but also any Russian weapons, including strategic nuclear weapons and weapons based on new principles, could be used for such protection,” Medvedev said on Thursday (22/9). Al Jazeera.

Four regions in Ukraine will hold a referendum today until 27 September.

These include Donetsk, Luhansk, Kherson, Zaporizhzhia, as well as parts of the Mykolaiv province.

The vote will take place under Russian occupation without international oversight. Ukraine and a number of Western countries condemned this action.

Medvedev insisted there was “no turning back” for the Ukrainian territories that Russia had occupied after holding the referendum.

“The Republic of Donbas (Donetsk and Luhansk) and other regions will be welcome in Russia,” Medvedev was quoted as saying. Reuters.

So far, Russia does not fully control the four territories it plans to annex. Moscow is said to only control about 60% of the Donetsk region and 66% of the Zaporizhzhia region.

Some observers consider Russia’s desperate attitude to hold a referendum in a number of areas is a form of concern for the current war situation. The reason is, the Russian troops experienced a setback until they surrendered at a number of points in Ukraine.

If these territories were officially annexed and joined by Russia, those areas would automatically fall under the umbrella of the Red Bear Country’s nuclear weapons. Russia could justify using nuclear weapons to defend these areas in war.

“To guarantee a ‘victory’, Putin is ready to hold an immediate referendum on the right to use nuclear weapons to defend Russian territory,” political analyst Tatiana Stanovaya was quoted as saying. The Guardian, early last week.

Feature: Are you a Spotify user? Here Are 7 Useful Spotify Playlist Tips You Need to Know! | GameBox