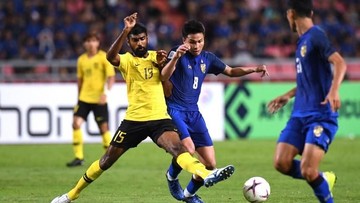 Thailand vs Malaysia match was fierce and interesting. Thailand dominated the match in the first 15 minutes. But disaster for Thailand occurred exactly in the 15th minute after team captain Chanatip Songkrasin was pulled off with an injury.

Chanatip’s exit made Thailand’s game no longer the same. The game went on for 32 minutes, Malaysia took the lead through La’Vere Corbin-Ong’s flick after receiving Safawi Rashid’s cross.

Malaysia looks like it will win in normal time. However, a goal from Pansa Hemviboon during the second half injury lasted five minutes to make the match ended in a 1-1 draw in regular time. A penalty shoot-out was held.

All Malaysian penalty takers: Dion Cools, Syafiq Ahmad, Matthew Davies, Declan Lambert and Corbin successfully carried out their duties. While one Thai penalty taker who failed was Supachok Sarachat after his execution was blocked by Hazmi.

The 5-4 (1-1) victory in the penalty shootout meant that Kim Pan Gon’s Malaysia will meet Tajikistan in the final of the Thai King’s Cup, Sunday (25/9). Meanwhile, Thailand will face Trinidad & Tobago in the match for third place.

Lufthansa: Ticket Prices Will Rise Due to Soaring Demand and Energy Costs