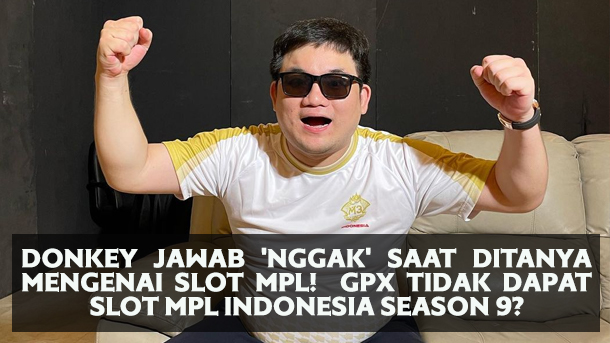 Geng Kapak or GPX is a new esports team owned by former professional Mobile Legends players such as Donkey, Oura, Marsha and Eiduart. GPX itself carries the theme of esportstainment on the team they formed themselves. GPX itself is currently aiming to enter MPL Indonesia Season 9 and rumors were circulating. However, when Donkey chatted with Mas Dean, Ihsan and others said that GPX would not play in MPL Indonesia Season 9.

“No. GPX is gathering clowns as well as being clowns.” Donkey said on the Nimo TV livestream Mas Dean.

» Unsuccessful, Forza Street Mobile Game Officially Closes This Year
» No So to RRQ Hoshi, MobaZane will dock to Bigetron Alpha?
» Beat RRQ in Recruitment, EVOS Gets Cute and Beautiful Tiktokers, Una becomes Brand Ambassador!
» Expansion into Basketball, EVOS Launches EVOS Thunder Bogor
» Fanny Old is Back! Fanny will get a significant energy buff in the next update!

This conversation was quite surprising to many people, because there was a lot of news circulating about the addition of slots in MPL Indonesia Season 9 and one of the teams that got the slot was GPX. However, it is still not known the truth of Donkey’s own words regarding this matter.
In addition to the main news in this article, the KotGa Crew also has an interesting discussion that you can watch in the video below.

News: Isn’t the Era already? Shroud Is at the Bottom of Frag Total Kill on his debut with the Sentinels! | GameBox