Ahead of the Verdict, Robin Promises to Reveal the Role and Involvement of Lili KPK 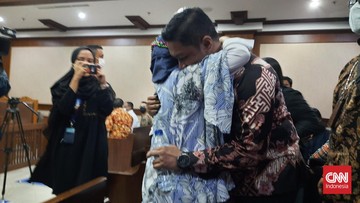 Former investigator of the Corruption Eradication Commission (KPK), Stepanus Robin Pattuju who was accused of bribery in a number of corruption cases stated that he would be responsible for his actions.

Robin stated that he would not run away from the case that ensnared him and was ready to face the judge’s verdict.

“I am responsible for what I did, I did not run,” said Robin shortly before the verdict trial began at the Central Jakarta Corruption Court (Tipikor), Wednesday (12/1).

On that occasion, Robin said that the Justice Collaborator (JC) application to reveal the KPK leadership involved in the case related to the Tanjungbalai Mayor was rejected by the KPK Prosecutor.

However, Robin stated that he would still reveal the alleged involvement of the Deputy Chair of the KPK, Lili Pintauli Siregar.

According to Robin, everyone should be held accountable for her actions, including Lili and her friends.

“Yesterday, I received information that JC had been rejected, and the KPK was rejected,” said Robin.

“I hope everyone who does yes should be held accountable. Everyone for their actions, including Lili and friends,” added Robin.

Previously, the Acting Spokesperson for the KPK, Ali Firki, said that the anti-corruption agency was very confident that the prosecution’s charges from the KPK would be proven. Therefore, according to Ali, the judge of the Central Jakarta Corruption Court (Tipikor) will declare Robin and his friends guilty, as demanded by the Prosecutor.

“From all the facts of the trial, of course we are very confident that the prosecution team’s charges will be proven,” said Ali.

The KPK’s Public Prosecutor (JPU) demanded that Robin be jailed and 12 years in prison and a fine of Rp500 million in subsidy for six months in jail.

In addition, Robin is also required to pay a replacement money of Rp. 2.32 billion with a payment deadline of one month after signing in.

“In the event that the defendant, the convict does not have sufficient property to replace the replacement money, he will be replaced with a prison sentence of 2 years,” he added.

They received a sum of money from several parties related to five corruption cases handled by the KPK.

First, Robin and Maskur received money from the Mayor of Tanjungbalai, M. Syahrial, worth Rp. 1.7 billion through Azis Syamsuddin as an intermediary.

Second, Robin received money from Azis and Aliza Gunado worth Rp. 2 billion related to the investigation into the Central Lampung Financial Allocation Fund (DAK) in 2017.

Apart from these two cases, there are three other cases, namely, the bribery of the Mayor of Cimahi, Ajay Muhammad Priyatna in exchange for Rp. 1.5 billion; In the case of Kalapas Sukamiskin which involved the name Usman Effendi, Robin received a bribe of Rp. 1 billion.

Finally, regarding the management of assets on behalf of Rita Widyasari, Robin and Maskur received a reward of 50 percent of the total assets promised by Robin worth Rp. 10 billion.

Oslo shooting is suspected of terrorism, the suspect is a Norwegian citizen of Iranian descent

Feature: Already Know This Feature? 5 WhatsApp Features You May Not Know! | GameBox