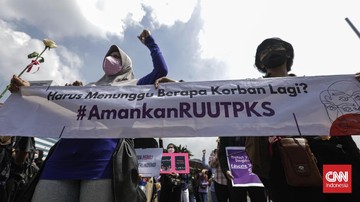 The government pushes the Draft Law on the Crime of Sexual Violence (RUU TPKS) was confirmed immediately. The government targets the draft law to be published by the end of January 2022.

Head of the Government Task Force for the TPKS Bill, Edward Omar Sharif Hiariej, assessed that the government and the DPR are in agreement on the TPKS Bill. He is optimistic that the discussion of the TPKS bill can be completed quickly.

However, the government respects the dynamics of the discussion in the DPR. The government, said Edward, is waiting for the DPR to start discussing the TPKS Bill.

Edward said his party had prepared a problem inventory list (DIM) for the discussion of the TPKS Bill. The government has also held informal discussions with the DPR five times.

“It is very effective to equalize perceptions, equalize the frequency of the needs that need to be regulated in the Bill on the Crime of Sexual Violence, so I don’t think there will be any more problems,” he said.

On the same occasion, the Presidential Chief of Staff (KSP) Moeldoko said his party would open the widest possible public participation during the discussion of the TPKS Bill. The government will also move quickly after the DPR begins discussing the draft law.

“One of them is the screening of aspirations for civil society and in this regard, we will also wait for a letter from the president to the DPR RI, including the submission of the DIM list,” he said.

Earlier, the Speaker of the House of Representatives, Puan Maharani, promised to start discussing the TPKS Bill as soon as possible. The bill will be confirmed as a House initiative next week.

“God willing, next week, Tuesday, January 18, the TPKS Bill will be passed as a DPR RI initiative bill,” said Puan at the DPR Plenary Meeting which took place at the Parliament Complex, Jakarta, Tuesday (11/1).

Alludes to President and His Son, Ugandan Writer Tortured in Detention

One Key Witness in the Mas Bechi Case Refuses to Attend the Court |nitoba.com

The confinement of Tangerang mothers, the debtor is suspected to be impatient