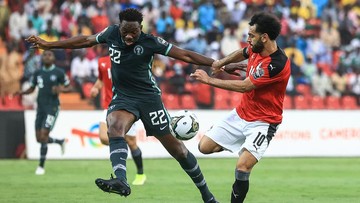 Nigeria managed to lead 1-0 through Kelechi Iheanacho in the 30th minute. The goal came from Nigeria’s attack on the left side.

The cross that was released into the penalty box was successfully countered by the Egyptian back line. But Joe Aribo was able to reach a wild ball and then head it towards Iheanacho.

After holding the ball, Iheanacho immediately released a hard kick that could not be blocked by the Egyptian goalkeeper, Mohamed El Shenawi.

Nigeria managed to maintain these advantages until the first half was over.

Entering the second half, Nigeria was still able to put pressure on Egypt. Mohamed Salah’s space was completely closed by Zaidu Sanusi and his friends so that the Liverpool player was not free to hold the ball and try to attack.

Entering the last minute, Egypt more aggressively attacked Nigeria. But it was Nigeria who returned to have a good chance to score.

In the counter-attack scheme, Chidera Ejuke runs fast and has good shooting space. However, Ejuke’s kick was blocked by El Shenawi.

The 1-0 score for Nigeria lasted until the game was over.