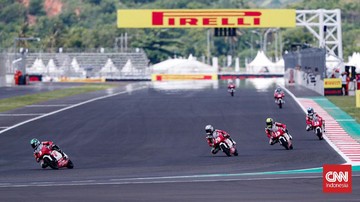 The government boosts the vaccination program to support the event Indonesian MotoGP from Mandalika Circuit which will be held on 18-20 March 2022.

Coordinator of PPKM Outside Java and Bali as well as Coordinating Minister for Economic Affairs, Airlangga Hartarto, said the government is targeting the third dose of vaccination to be achieved in the next three months.

“Then it was also reported readiness for MotoGP preparation which will be watched by close to 64 thousand. Cities in Mataram are ready with vaccinations, the second dose is 78 percent, West Lombok 57.9 percent, Central Lombok 61 percent, East Lombok 57 percent, and North Lombok 69 percent,” said Airlangga in a virtual press conference, Monday (10/1).

“It is hoped that in January, February, March, the third dose of vaccination can be carried out,” he continued.

Regarding the vaccine booster, Airlangga continued, the government has already prepared it. Some that have received EUA from BPOM are CoronaVac, Pfizer, AstraZeneca, Moderna, and Zifivax.

On that occasion, Airlangga added that level-based PPKM will separate the number of cases brought by foreign travelers (PPLN) with the results of local transmission or transmission.

“Therefore, PPLN will make a different assessment, that is, we will give special treatment to entry point,” said Airlanga.

Indonesia is hosting the second series of the 2022 MotoGP season after the Qatar MotoGP on March 6.

In addition to the racing event, the Mandalika Circuit is also one of the tracks used in the official pre-season test session in February.

News : The Climbing Feature Is Considered Difficult by a Genshin Impact Player! | GameBox

MotoGP, Francesco Bagnaia: No mistakes in the second half