0
SHARES
0
VIEWS
Share on FacebookShare on Twitter
Even though miHoYo continues to add updates and new characters for the satisfaction of the players, who would have thought that Genshin Impact still has some glitches. One of them is Xiao’s odd-looking glitch, where he appears to be trapped in a swimming animation while being lifted up by the wind current. This glitch was recently shared by one of the players on Reddit.

» Thinks Without Expression, miHoYo Says It Will Fix Diluc Face Bug Without Expression
» EVOS Returns to the Arena of Valor! EVOS TH Officially Returns to RoV Pro League Next Season!
» Some Genshin Impact Players Rate In-Game Dialog Options as Not Varied or Useful!
» Not Playing Against Blacklist, XINNN: Shocked Plus Sad Plus Blasphemed, Mixed Up!
» Looking for New Challenges! MobaZane Announces His Career in Asia!

Reported from Game Rant, a post on the Genshin Impact subreddit revealed an interesting video featuring two characters, Hu Tao and Xiao floating in the air, around the Dunyu Ruins. While Hu Tao was floating normally, Xiao had a glitch where his pose looked like he was swimming in the air. Players can see an image of the glitch below. 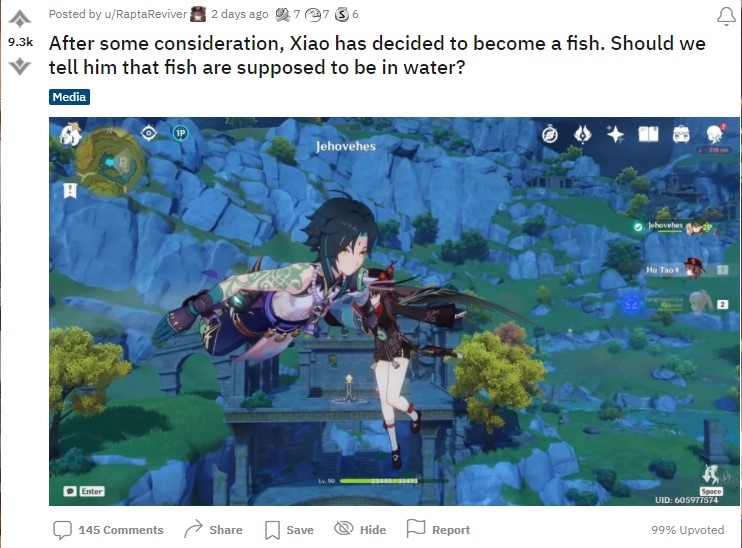 Xiao’s popularity has increased since appearing on the re-run banner in the 2.4 update. Xiao is one of the strongest DPS characters in Genshin Impact at this time, on par with Ganyu and Hu Tao.

Genshin Impact can now be played on PC, PS4, PS5, Android, and iOS. While the Switch version is still in the development process and there is no confirmation of its release schedule yet.

On average, children stare at screens for 6 hours per day… How to reduce it? | spacetechno

More than 700 cases of monkeypox worldwide, 21 in America