About two years ago, Jorge Lorenzo revealed the four most important moments in a racer’s life. The former Spaniard said: the first race, the first victory, the first world title, and when he said goodbye.

This was stated by Lorenzo when he announced his resignation from the Repsol Honda Team and the MotoGP World Championship on November 14, 2019.

Lorenzo admits that four important moments during the driver’s career, at the same time also become part of life experiences.

While saying these things, there was a moment that turned out to make him decide to resign because he no longer had the motivation that made him one of the perfectionist racers around the world. grid Motorcycle Racing World Championship at that time.

As is known, Lorenzo has won everything in the Motorcycle Racing World Championship. He won the 250cc world title (now Moto2) in 2006 and 2007.

Rising to the highest class, MotoGP, in 2008, Jorge Lorenzo did not look awkward fighting the legend, Valentino Rossi, who became his partner in the Yamaha factory team. Next, history speaks.

With Yamaha, Lorenzo managed to win three MotoGP world titles: 2010, 2012, 2016. He then moved to Ducati and only lasted two years with only three main podium finishes.

In 2019, Lorenzo moved to the factory Repsol Honda team to replace his compatriot, Dani Pedrosa, who retired. Instead of winning, Lorenzo was not able to bring out the potential of the Honda RC213V and withdrew a year ahead of his contract. 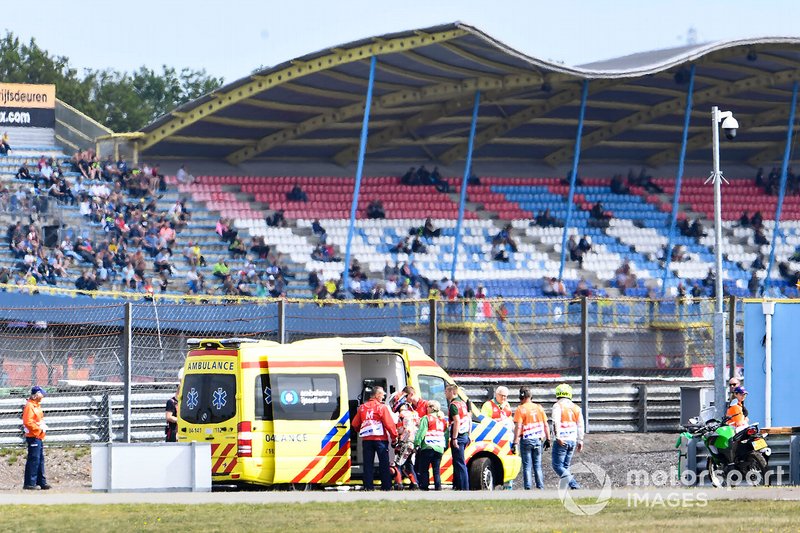 Jorge Lorenzo, Repsol Honda Team was rushed by ambulance to the nearest hospital after having an accident during the first free practice of the 2019 Dutch MotoGP at the Assen Circuit.

At the end of June 2019, Lorenzo crashed in the first free practice session of the Dutch MotoGP at Assen. As a result, he suffered a spinal fracture that forced him not only to miss the Dutch GP race but also the three races that followed.

As quoted DAZN, Lorenzo called the accident at Assen a turning point in his career. He said that at that time he wanted to hang up his helmet immediately after the Dutch GP.

“I really wanted to retire after Assen. However, I don’t want to rush it so that it will be delayed as long as possible,” said Lorenzo.

Apparently Lorenzo’s little heart said he had to keep trying to get up. However, since the incident at Assen, Lorenzo said he was no longer able to be patient or rediscover the motivation to return to the pole position as before the accident.

Indeed, Lorenzo was able to recover from injury in 2014. At that time, he was able to finish in P5 just 48 hours after undergoing surgery on the clavicle (collarbone).

However, the crash at Assen which caused fractures in the sixth and eighth vertebrae, really hit Lorenzo. In fact, strengthening a team as big as Repsol Honda was not able to restore his motivation.

“When you’re 30, 31 or 32 you’re more careful. Every time you fall with an injury, it’s like adding a stone to your mental bag. Bad experiences will make you more careful,” said Lorenzo.

After suffering a series of injuries, one of which was at Assen, Jorge Lorenzo finally decided to leave Honda and withdraw from MotoGP at the end of the 2019 season.

According to him, if he didn’t fall at Assen, he would definitely continue his career with Honda. Lorenzo also said he really wanted to return to the elite racer ranks. However, after the injury at Assen, it was almost impossible to control the Honda RC213V any better.

Jorge Lorenzo admits he got everything in MotoGP but also experienced one of the worst phases of his life.

“I know the risks in a racing sport like MotoGP. But is it worth it to lose the next 20, 30 or 40 years just to try to win some races or some titles?” he said.

Everybody knows, Jorge Lorenzo – 47 Grand Prix winner, 114 podiums, 43 pole position, and 30 fastest lap from 203 MotoGP starts – finally decided to hang up his helmet when he was 32 years old. Later, many judged that Jorge Lorenzo’s decision was correct.

The U-19 National Team Again Aims for TC in Europe, the Netherlands Becomes the Goal