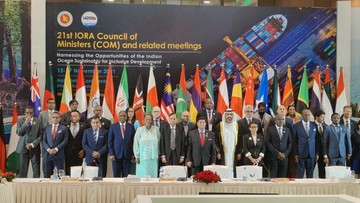 The Indonesian Ambassador to South Africa, Salman Al Farisi, was elected as Secretary General of the Indian Ocean Rim Association (IORA) for the period 2022-2024. This position is part of Indonesia’s diplomatic achievements throughout 2021.

“I would like to take this opportunity to express my gratitude for the support and trust given by IORA member countries during the selection process for the new IORA Secretary General,” said Retno.

Retno hopes that IORA can contribute to building a strong Indian Ocean region. According to him, this is important to create stability and peace in the Indo-Pacific region.

“Indonesia hopes that IORA can contribute to building a strong Indian Ocean, which will contribute to the creation of a stable, peaceful and prosperous Indo-Pacific region,” he explained.

IORA is the only regional organization in the Indian Ocean region. This organization aims to strengthen cooperation in the fields of economy, maritime, and sustainable development. IORA has 23 member countries and 9 dialogue partners.

In order to keep the chance of winning the title, Izan Guevara aims at the podium at Misano