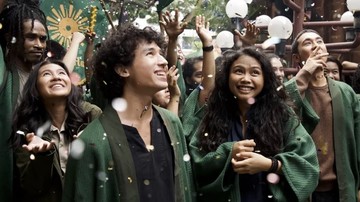 “We found that a name from the copy of Cahaya film team was recorded as the reported person for his alleged past actions,” wrote Rekata Studio and Kaninga Pictures in an official statement on Monday (10/1).

“As an ethical responsibility for our commitment and to respect the reporting and the process that will follow it, we have decided to remove the name of the reported person from the film credits of Copy Light and the film’s publication materials,” he continued.

Rekata Studi and Kaninga Pictures said they would be committed to providing a safe and free space from sexual harassment in the film production environment. They also promised to side with survivors of sexual harassment.

The production team explained that the filming of Copy Light went on safely for 20 days. They will also be serious in dealing with cases of sexual harassment.

“We hope that the processes that occur after this report will run to accommodate the interests of the survivors and can be completed according to the path,” wrote Rekata Studio and Rekata Pictures.

Rekata itself is the production house behind the film Copying Cahaya, which tells the story of Sur (Shenina Cinnamon)’s struggle to seek justice for the case of distributing selfies when she was drunk. Sur does not remember anything that happened when the photo was taken at a community theater party.

Sur then enlists the help of his childhood friend, Amin (Chicco Kurniawan). Amin is a photocopier who lives and works on campus. The two of them work together to find out what really happened behind the photo.

Continue to the next page..

US Secretary of Defense Tests Negative for COVID-19

3 Coaches Who Can Replace Robert Alberts at Persib