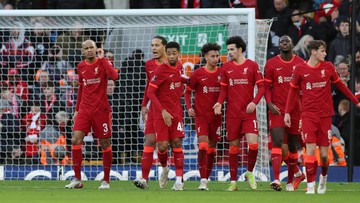 Liverpool managed to beat Shrewsbury Town with a score of 4-1 in the third round match FA Cup at Anfield, Sunday (9/1).

Liverpool were first surprised by Shrewsbury Town’s goal in the 27th minute. This goal stems from the movement of Nathanael Ogbeta on the right side of the Liverpool defense.

Ogbeta then sent a cross to the penalty box. Daniel Udoh’s movement in the penalty box was not controlled by the Liverpool player. Udoh then fired a hard shot that left Liverpool goalkeeper Caoimhin Kelleher helpless.

Before the first half ended, Liverpool were able to turn ahead through Fabinho’s penalty. Fabinho coolly does his job well. He managed to outwit Marosi who was moving in the wrong direction.

Leading one goal has not made Liverpool calm. Because of that the Reds fielded Takumi Minamino to replace Max Woltman at the start of the second half. Because he has not yet managed to add a goal, Roberto Firmino followed suit in the 64th minute.

Firmino finally increased Liverpool’s advantage to 3-1 through his goal in the 78th minute. Firmino scored with a back heel from close range to capitalize on the chaos created in front of the Shrewsbury goal.

In injury time, Fabinho scored his second goal of the game and made Liverpool lead 4-1. The score lasted until the end of the game.