The Origins of Ramen, Japanese Noodles 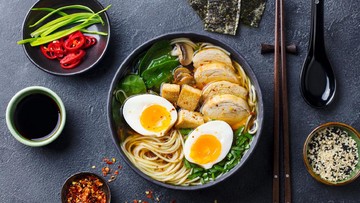 Apart from sushi, Windows is one of the typical foods Japan which is much loved by lovers culinary in this world. What are the origins of ramen like?

Ramen has its roots in noodle dishes originating from China which later spread in Japan and blends into the local food culture.

As reported from the page raumen.co.jp, the opening of a port in Japan in 1859 gave access to influences from China and the West, including in terms of food.

The construction of the port was also accompanied by the abolition of the prohibition on eating meat which lasted almost 1,200 years.

China Town that emerged in Japan is filled with Chinese restaurants serving noodle dishes, the forerunner of Japanese ramen. Initially, Chinese food was deemed too expensive for ordinary people. However, Chinese food is becoming very popular in Japan.

Quoted from information at the Shin-Yokohama Ramen Museum, Japan, Chinese traders already have experience doing business with Westerners, they have had ports earlier than Japan.

Westerners bring Chinese translators with them when they visit Japan. Some of the translators are traders and cooks.

The first ramen made in Japan

It is said that the first ramen in Japan was Nankinsoba in Hakodate. Actually, this is a dish of Chinese noodles, although it is not clear whether the food can be called ramen as it is today.

The port in Hakodate opened in 1859. At that time there was an advertisement for nankinsoba that was published in the Hakodate Shimbun on April 28, 1884. The restaurant was called Yowaken, a Western-style restaurant. Yowaken also introduced Nankin dishes.

At that time, nankinsoba sold for 0.15 yen, which is equivalent to 2000 to 3000 yen in today’s standards, which is quite expensive. Nankinsoba could be the forerunner of ramen, although no one knows its shape, description or photos.

Later, many students from China were sent to Japan to study the Western system adopted by Japan. In 1906, the number of Chinese students in Japan for a year reached a record 12 thousand people.

The Chinese community in Japan then opened restaurants with cheap food prices to accommodate students who were not suitable for Japanese food.

The Great Kanto Earthquake that occurred on September 1, 1923 also affected the world of ramen. There was a decentralization of professional workers and a growing number of shops. Ramen chefs flock to work after losing their livelihoods in Tokyo.

This earthquake disaster made chefs not only gather in one area, which in the end introduced ramen to other areas outside Tokyo, giving birth to local ramen, as well as ramen shops that are more affordable.

Check out the story of the first ramen shop in Japan on the following page.

The first ramen shop in Japan

News : Being able to play in various roles is the reason Lemon was brought to the MSC 2022 event by RRQ Hoshi! | GameBox