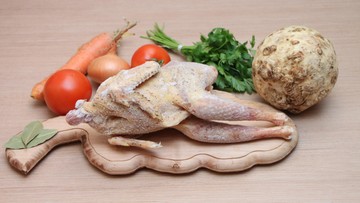 Wash food before cooked is a natural thing. However, if you are cooking chicken, forget this rule first. Raw chicken should not be washed before cooking.

Reported from Readers Digest, Washing chicken can actually increase the spread of bacteria and the risk of cross-contamination. It is undeniable, raw chicken is full of bacteria, like Campylobacter or Salmonella. But believe me washing it with water does not help reduce these bacteria.

The Centers for Disease Control and Prevention says washing chicken actually exacerbates the spread of bacteria because running and splashing water can spread bacteria around your sink, countertops and even your clothes.

Poisoning Campylobacter can cause stomach pain, severe diarrhea, and sometimes vomiting between 2 and 5 days. Not a few also have irritable bowel syndrome, reactive arthritis, and Guillain-Barré syndrome.

Instead of washing chicken, here are things you can do to prevent bacteria: Campylobacter in chickens does not cause poisoning.

If you cut the chicken using a knife and cutting board, thoroughly wash all of these tools. You should also wash your hands with soap and warm water after handling raw chicken. This helps stop the spread Campylobacter.

3. Cook the chicken until cooked

Make sure the chicken is fully steaming hot before serving. You have to cook the chicken until it is fully cooked.

Feature: Here Are Some Tips To Speed ​​Up Your Laptop For Maximum Gaming! | GameBox

Brigadier J’s Case: Time to Clean Up the Internal Police

President Asks Pertamina Not to Rely on Subsidies, Pertamina: We Continue to Save |nitoba.com