Reluctant to get married, London man puts up a billboard to find a wife 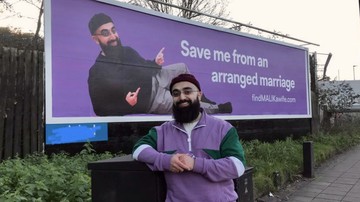 Instead of going on online dates or asking to be introduced to her friends, she chose to advertise herself using a large billboard. The billboard or billboard looking for a match belonging to a 29-year-old man from London was installed in the city of Birmingham, England.

He advertised himself to his future wife. The purple billboard also reads the words ‘Save me from matchmaking,’ and includes a website where people can register or register their friends who meet the criteria.

Not just an advertisement, she also created a website findmalikawife.com and described herself in various criteria.

Malik comes from a strong Punjabi family so the future wife must have a great sense of humour. He is also an only child and will take care of his parents later in life. This requirement is important to say because Malik thinks it could be the thing that makes his potential partner back down.

What is the reason behind his reckless attitude to install billboards to look for this love?

“I just haven’t found the right girl yet. It’s hard out there. I have to use a billboard to see!” Malik said quoted from the site.

He also revealed that his highest criteria were a matter of “personality and belief” rather than anything else. Not only that, everything he does including billboards and this website is no joke.

He is serious about finding his life partner. The potential partner he wants is a woman in her 20s and who is strengthening her Dien (Islamic way of life). Malik is also open to all women of various ethnicities.

“Matchwork has a place and tradition in many Islamic cultures. I just wanted to try and find someone first.”

What is the fate of Malik’s love because of the matchmaking billboard next? Until now on his twitter page, Malik said that he had received more than 400 applications for prospective wives.