0
SHARES
0
VIEWS
Share on FacebookShare on Twitter
ASUS ROG announced a new line of gaming laptops at the 2022 Consumer Electronic Show (CES) in Las Vegas, United States, while introducing a series of the latest technologies and innovations in the gaming laptop industry. Announced at a virtual event titled For Those Who Dare: The Rise of Gamers, ROG’s latest gaming laptop not only comes with an updated design but is also powered by the latest hardware and features.

“Bringing the best performance through technological innovation to gamers is the manifesto of the ROG gaming laptop line in 2022,” said Jimmy Lin, ASUS Regional Director Southeast Asia. “The latest ROG laptops will be powered by the latest generation of CPU and GPU and equipped with the latest technology and features. Some of them are the use of the MUX Switch and the latest ROG Intelligent cooling cooling system equipped with Liquid Metal Conductonaut Extreme in its flagship model.”

The entire line of gaming laptops introduced at CES 2022 can also be seen virtually through the ROG Citadel XV application. In its latest update, ASUS collaborated with Aim Lab to present new content in the form of mini FPS games that contain a new storyline, improved graphics quality, to a wider exploration area. ROG Citadel XV is here again as a means to enjoy the CES 2022 event as well as a fun way to get to know the latest ROG product range virtually.

The following is the lineup of the latest ROG gaming laptops introduced at CES 2022. 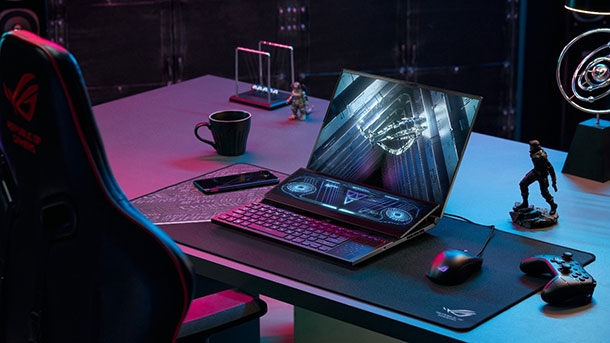 ROG Zephyrus Duo 16 comes with two main screen options. The first option uses the ROG Nebula HDR screen, which is a screen technology that adopts a QHD (16:10) resolution with a mini-LED panel capable of presenting a 165Hz refresh rate and is VESA DisplayHDR certified with a 1:100,000 contrast ratio. While the second option offers a special screen developed by ROG in collaboration with BOE. The screen called Dual Spec allows ROG Zephyrus Duo 16 users to change the screen mode from 4K 120Hz resolution to Full HD 240Hz. The screen provides unprecedented flexibility and offers the option to work and play games comfortably without compromise.

The ROG Zephyrus Duo 16 dual-screen gaming laptop is also powered by the latest operating system, Windows 11. While the main components are powered by AMD CPUs and the latest generation of powerful NVIDIA GPUs. In addition to having an extra air cavity thanks to the AAS Plus 2.0 feature which is integrated with the ScreenPad Plus mechanism, ROG Zephyrus Duo 16 is also equipped with the latest generation cooling system that uses Liquid Metal Conductonaut Extreme to cool the high-end laptop. The presence of MUX Switch on ROG Zephyrus Duo 16 will also allow gamers to get full performance from the combination of CPU and GPU installed on this laptop.

Continuing the trail as the most popular gaming laptop, ROG Zephyrus G14 looks stylish again with an updated design. This ultra-portable gaming laptop is not only equipped with Windows 11, but also the latest generation AMD CPU and Radeon GPU and is equipped with MUX Switch for the maximum gaming experience. The ROG Intelligent cooling cooling system that has been equipped with Liquid Metal will help cool all components including the DDR5 RAM memory module and the 1TB PCIe SSD installed on the ROG Zephyrus G14. Designed as a gaming laptop that offers premium performance in an ultra-portable body, ROG Zephyrus G14 appears in two color variants, namely Moonlight White and Eclipse Gray. The latest ROG Zephyrus G14 this time is also equipped with the AniMe Matrix feature, which is a special panel consisting of thousands of mini LEDs on the back of the screen. This feature can display writing, laptop status, clock, to animation, AniMe Matrix makes ROG Zephyrus G14 appear more personal and different from other laptops.

The ROG Zephyrus G14 is also one of the first laptops to adopt the ROG Nebula display technology. This screen technology offers a QHD resolution and a refresh rate of 120Hz, making it suitable for a variety of activities. The screen also has a brightness level of up to 500 nits, a color gamut of 100% DCI-P3, and a response time of 3ms. Powered by Dolby Vision, Adaptive Sync, and certified PANTONE Validated Display makes ROG Zephyrus G14 perfect for entertainment and content creation.

ROG Strix SCAR is back in 2022 as a laptop for eSports fans. Focusing on performance, this gaming laptop has been equipped with the latest generation of Intel CPUs and NVIDIA GPUs that are cooled by the ROG Intelligent cooling system that uses liquid metal. ROG Strix SCAR is also equipped with a MUX Switch, 4×4 PCIe SSD storage, and 4800MHz DDR5 memory for a maximum gaming experience. 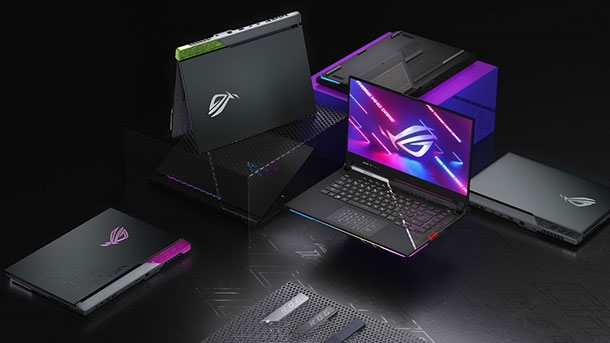 Speed ​​is the hallmark of ROG Strix SCAR and for that this laptop is equipped with screen options up to Full HD 360Hz and QHD 240Hz. This special laptop for eSports athletes is also equipped with technology from Dolby Vision HDR and is equipped with Adaptive Sync so gamers avoid the effects of screen tearing and stuttering. Meanwhile, a fast response time of 3ms ensures ROG Strix SCAR users always excel on the battlefield.

Similar to its sibling, ROG Strix G also comes with the ROG Intelligent cooling cooling system that uses liquid metal to cool AMD CPUs and the latest generation NVIDIA GPUs it carries. As for the screen, ROG Strix G adopts a Full HD screen up to 360Hz and QHD up to 240Hz. The screen also has a 3ms response time to support gamers who like to play competitive games. ROG Strix G appears in three color variants, namely Eclipse Gray and two neon colors that are unique and different from other gaming laptops.

Unlike all the previously introduced laptops, the ROG Flow Z13 is the most powerful gaming tablet in the world. Although very compact, ROG Flow Z13 has powerful performance because it is powered by the latest Intel CPU and NVIDIA GPU. Not only that, this gaming tablet is also equipped with 5200MHz LPDDR5 memory and MUX Switch for maximum gaming performance. ROG Flow Z13 also comes with a futuristic design that is inspired by the theme of outer space in the 20th century but still puts forward the main concept, namely portability.

ASUS brings two screen options to the ROG Flow Z13. The first is a 4K 60Hz display with a color gamut of 85% DCI-P3. While the second option is a 120Hz Full HD display with a 100% sRGB color gamut. Both adopt a 16:10 screen ratio, support Dolby Vision technology, are coated with Corning Gorilla Glass, are equipped with Adaptive-Sync, and have PANTONE Validated Display certification.

Because it is a tablet, ROG Flow Z13 can be operated using the integrated touch screen. There is also a keyboard with a removable touchpad and a main body stand that can be opened up to 170⁰. Because the main components are located behind the screen, ROG Flow Z13 has better air circulation compared to traditional laptops. This is what makes ROG Flow Z13 able to accommodate gaming-class hardware even though it comes with a very compact body.

How to turn off a car alarm that suddenly sounds - Nitoba

Ridwan Kamil: Aare River, I Entrust Our Child’s Body to You

The Ministry of PUPR Starts Planning for the Old Town of Kesawan Medan |nitoba.com