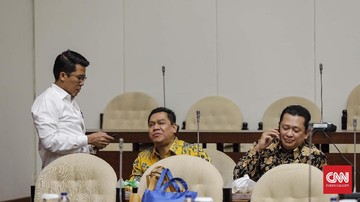 Chairman of the DPP Party Golkar Adies Kadir stated that his party was waiting for an official announcement from the Corruption Eradication Commission (KPK).NCP) related to Hand Catch Operation (THERE) against the Mayor of Bekasi, Grace Effendi.

According to him, an official announcement from the KPK is needed so that it knows the case that ensnared Pepen – as Rahmat Effendi is familiarly called, and determines the steps to be taken.

He said that Rahmat no longer has a position in Golkar, but is still a Golkar cadre.

“Usually, for Golkar cadres, we provide legal assistance if the person concerned wants it. But we’re still looking at it, if it’s true,” said the Deputy Chairman of Commission III of the DPR.

“We are waiting for an official announcement from the KPK,” he added.

The Corruption Eradication Commission (KPK) team arrested a number of parties in a hand arrest operation carried out in Bekasi, West Java, Wednesday (5/1) at around 14:00 WIB.

It is not yet known what the OTT was related to the case and the evidence that was secured.

“Currently, those who have been detained have been brought to the KPK’s Red and White Building for inquiries,” said Plt. Spokesperson for KPK Enforcement, Ali Fikri, Wednesday (5/1).