Hundreds of Motorists Stuck in Snow Near Washington DC 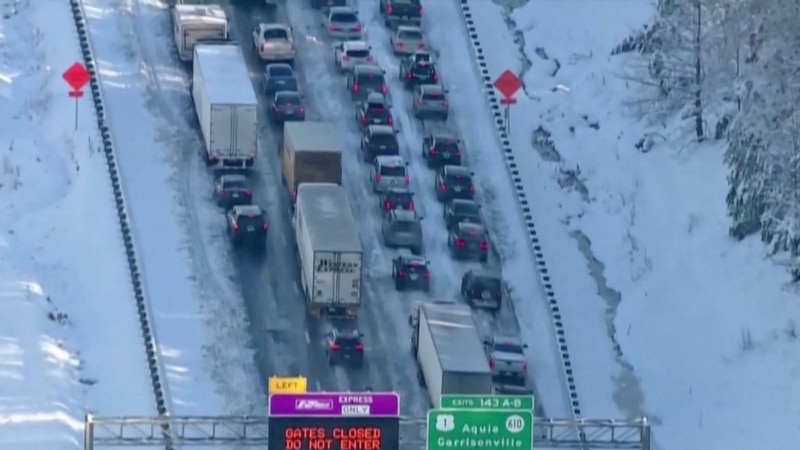 Hundreds of motorists, including a US senator, were stuck in sub-freezing temperatures Monday (3/1) and Tuesday (4/1) on an interstate highway in Virginia after a heavy snow accident involving six trucks. trailers.

The Virginia Department of Transportation said both directions of Interstate 95 were closed between the cities of Ruther Glen and Dumfries, which are about 50 kilometers south of Washington, D.C.

No one was hurt in Monday afternoon’s collision, but the incident brought traffic to a halt on the main US east coast highway. Drivers were unable to move due to accumulated snow, forcing many people to spend the night in their cars. A trapped driver told a television station he was afraid he would run out of gas.

Among those trapped was Virginia American Senator Tim Kaine, who snapped a photo of his ordeal on the highway Tuesday after sunrise.

“My office is in touch with VaDOT (Virgina Department of Transportation) to inquire about how we can help…,” Kaine tweeted 19 hours after starting the trip to Washington that normally takes two hours.

Early Tuesday (5:20 p.m. local time), the Virginia state department of transportation tweeted that its crew would begin “picking up people stuck all the way” in both directions.

Snow fell between 18 and 28 centimeters in the area Monday, according to the National Weather Service, causing thousands of traffic accidents and stuck vehicles.

In addition, the blackouts have darkened thousands of homes and, the transport department said, rendered traffic cameras out of service, hampering relief efforts.

More than 277,000 customers remained without power Tuesday morning, according to the site poweroutage.us. [lt/jm]

Using Allo Bank, You Can Buy Advanced Blenders at Discount Prices at Metro