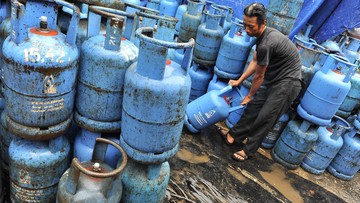 A number of LPG consumers (LPG) non-subsidized 12 kilograms (kg) admitted that he was surprised by the price, which has now reached Rp. 180 thousand at retailers.

This happened in line with the policy of PT Pertamina (Persero) which gradually increased the price of non-subsidized LPG by Rp. 1,600-Rp. 2,600 per kg since last Saturday (25/12).

Mama Keni (54) a housewife who lives in the Pela Mampang area, south Jakarta, was surprised because she did not know about the price increase before.

“Surprised because I didn’t know before,” he told CNNIndonesia.com, Tuesday (4/1).

Previously, Keni used to buy 12 kg of gas for one month’s needs at a price of IDR 160 thousand. However, with the price increase to Rp180 thousand, now he has to spend more.

He also admitted that the price increase was quite pronounced, so he had to be more frugal. Moreover, the price of other basic needs such as eggs and chili also increased.

“I also feel that the prices of other necessities also go up. I don’t want to be more efficient. Eggs, chilies are more expensive,” he said.

For the price of red cayenne pepper, according to the Jakarta Food Price Info, the average price per day is Rp. 94,500 per kg. Meanwhile, eggs are sold for an average of IDR 29,225 per kg.

Along with dancing, Sundari (47) who lives in South Jakarta was also surprised and objected to the increase in the price of non-subsidized LPG. The reason is, even the upper middle class families are not economically stable.

Therefore, the housewife as well as the boarding house entrepreneur has temporarily chosen to switch to subsidized 3 kg LPG gas.

“More and more people are getting into trouble. So most people are not running smoothly, so they turn to subsidies,” he said.

Previously, Sundari used to buy 12 kg of gas for one month’s needs at a price of Rp. 150 thousand. With the current increase, he has to pay IDR 180 thousand per tube.

To note, Pertamina raised the price of non-subsidized gas due to a spike in international prices, particularly the Aramco Contract Price (CPA) price. Currently, the portion of non-subsidized LPG consumption is around 7.5 percent.

News : Because He Likes Yu-Gi-Oh!, His Family Makes Tombstones In The Shape Of Yu-Gi-Oh! Cards! For His Son | GameBox