Chili and Chicken Eggs Create an Inflation Field of 0.44 Percent as of December 2021 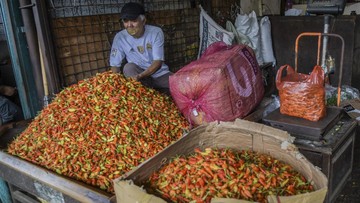 Central Bureau of Statistics (BPS) recorded that the Consumer Price Index (CPI) experienced inflation or increase price by 0.44 percent on a monthly basis in Kota Medan, North Sumatra in December 2021. The index rose from 105.46 to 105.92.

Dinar said inflation did not only occur in Medan, but all cities in North Sumatra. In detail, Sibolga is 0.17 percent, Pematangsiantar is 0.85 percent, Padangsidimpuan is 0.35 percent, and Gunung Sitoli is 0.62 percent.

Furthermore, Dinar explained that there was an increase in prices from seven expenditure groups, namely the food, beverage and tobacco group by 1 percent, the clothing and footwear group by 0.25 percent, the housing, water, electricity, and household fuel groups by 0. 1 percent.

On the other hand, the groups that experienced a decline in prices were the information, communication and financial services group by 0.07 percent and the recreation, sports and culture group by 0.03 percent. Then, the other two expenditure groups did not experience changes in the index, namely health and education.

Empowering Former Terrorists: From the Quail Egg Business to the Deradicalization of Napiters