Valentino Rossi is Flattered to Get a Tribute on MotoGP Tracks

Valentino Rossi has made his name in all eras during his 26 year career in the Grand Prix Motorcycle Racing World Championship. And, rider The Italian will continue to do so, even though he will no longer appear in MotoGP from this year.

For the circuits at Le Mans, Silverstone and Spielberg, for example, it has confirmed that there will be a special The Doctor’s tribune in 2022. This means that Rossi’s distinctive yellow color still dominates the stand.

It remains to be seen whether, apart from one of Rossi’s stands, there will also be a corner named after the nine-time world champion in the future.

Marc Marquez, however, believes that yellow will continue to be the dominant color on MotoGP circuits. “More than half of the stands will remain yellow,” said Rossi’s arch-rival.

Valentino Rossi himself was flattered to know. “I assume that this will continue in the years to come, but of course it won’t be the same as it was before,” said The Doctor.

“Nevertheless, there will still be a lot of people on the track with yellow hats and #46. For me, of course, it’s a fantastic feeling. I think it’s good for MotoGP as a whole. That will help the atmosphere on the track in the years to come.”

Rossi, who will also field Team VR46 to compete in the class premier starting 2022, planning to come live in a race or two next season. 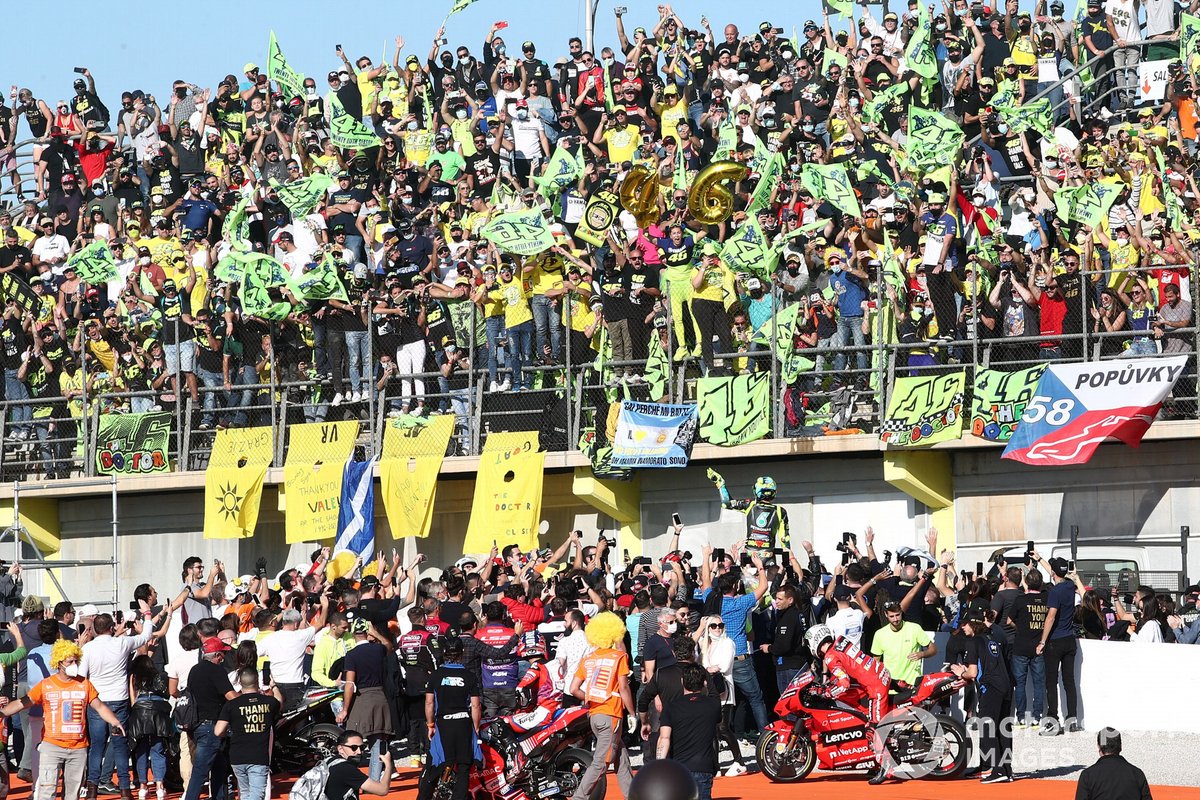 Valentino Rossi, Petronas Yamaha SRT, gets a standing ovation from the fans in the stands

“I will definitely visit the races now and then to support our team. After all, there are a few riders from the academy (VR46) on the grid,” he said referring to runner-up MotoGP 2021 Francesco Bagnaia (Ducati and Franco Morbidelli (Yamaha) among other riders.

In a press conference after the Valencia Grand Prix, Rossi admitted that he did not know what he would feel when he returned home paddock not for racing. “How I feel at the MotoGP weekend without racing, I can’t say yet. I have to try it to see if I will enjoy it or not.”

“During my career, a large number of people have started racing in MotoGP and so has my career. This sport has developed, has gained fame. This applies to Italy as well as the rest of the world.

“I am happy to understand now that over the course of my career I have become something of an icon. It’s a lot of fun and certainly the biggest achievement of my career,” the 42-year-old concluded.

Religious Lecturers to be Involved in Countering Terrorism |nitoba.com

Troubled in MotoGP, Raul Fernandez refuses to return to Moto2