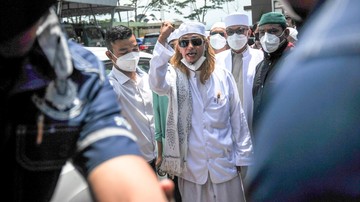 Director of the Special Criminal Investigation of the West Java Police Kombes Pol Arief Rachman said the investigation team had found two valid pieces of evidence and supported the determination of BS as a suspect.

With the determination of the suspect, said Arief, the police immediately arrested and detained Bahar.

“Thus, investigators have been able to increase the legal status of brother BS and brother TR to be suspects,” said Arief at the West Java Police Headquarters, Bandung City, Monday night, as quoted Between.

Apart from Bahar, the West Java Regional Police also named a man with the initials TR as a suspect. TR is said to be the uploader of the YouTube video that ensnared Bahar.

If convicted, Bahar and TR face up to five years or more in prison.

The determination of Bahar as a suspect was carried out by the West Java Regional Police after examining him as a witness on Monday afternoon.

Until 16.00 WIB, Bahar Smith was still being investigated by the West Java Police Ditreskrimum investigation team.

Monitoring CNNIndonesia.com, hundreds were seen visiting the West Java Regional Police Headquarters since 11.00 WIB. The crowd was concentrated at the entrance to the regional police headquarters.

They brought several posters containing the messages ‘Indonesia is Peace Without Intimidation’ and ‘Ulamas are not your enemies’.

Regarding Three Periods, Jokowi Says Obeying the Constitution and People’s Will |nitoba.com