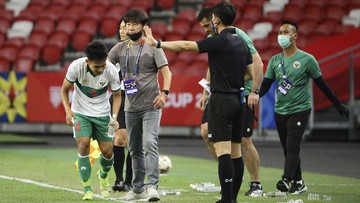 After the last match against Thailand on the first day of 2022, Shin gave his appreciation to Asnawi Mangkualam’s performance in the press conference session.

Shin’s sweet words for the Garuda squad players were heard again when answering questions in an interview with Yonhap.

“The players fought until the end, and they improved a lot,” Shin said as quoted from Yonhap.

Shin also mentioned things that were not much different from the words written in the uploads on Instagram.

“There are regrets about the outcome of this Suzuki Cup, but the players were quick to congratulate,” Shin said.

Even though he failed to occupy the top podium, Shin remains optimistic that he can achieve glory with the Indonesian national team in the future, as he mentioned in the press conference after the second leg final and uploads on social media regarding the target of winning the 2022 AFF Cup.

PDIP: Awards for DKI Not Useful, Residents Are Still Flooded

Overcome Inflation, US Considers Lifting Some Tariffs on Chinese Products