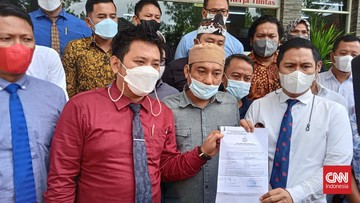 Choki officially reported Edy to the police because the former Kostrad Commander did not apologize for trapping him in public.

“We will first examine the witness who made the report and the next step will be conveyed to the media,” said Director of the General Crime Directorate (Ditkrimum) of the North Sumatra Police, Kombes Pol Tatan Dirsan Atmaja, at the North Sumatran Malpolda, Monday (3/1).

Tatan said anyone has the right to make a report to the police.

“Anyone has the right to make a report. But the police report has not yet reached our table,” said Tatan.

Tatan said his party would coordinate with the SPKT to handle this case. However, he was reluctant to answer further about whether Edy might be summoned for questioning or not.

In the letter numbered STTLP/03/1/2022/SPKT/Polda North Sumatra, Edy was reported to have committed a crime in accordance with Article 310 in conjunction with Article 315 of the Criminal Code.

“Article 310 in conjunction with Article 315 carries a penalty of under 1 year. But we will be procedural regarding the case, and of course we will coordinate with the reporting party involving Wasidik,” said Tatan.

Tatan admitted that he was still waiting for the report file to arrive at the police desk before determining the follow-up to the case.

“We’ll see. We’ll tell you. The LP hasn’t arrived at our table yet,” he said.

Choki officially reported Edy because he felt he had humiliated him in public. Choki was manipulated and expelled by Edy during a ceremony to give affection for athletes and coaches of XX PON in Papua at the Tengku Rizal Nurdin Hall, Monday (27/12) afternoon.

“Hopefully it will be processed properly so that it creates a sense of justice for me,” said Choki accompanied by his lawyer, Teguh Syuhada Lubis and Gumilar Nugroho.

Despite having reported Edy to the police, Choki admitted that he still opened the door to apologize. He hoped Edy would openly apologize. Because it has also been humiliated in public.

“God willing, until now (opening the door for forgiveness). If he is also present, I will make sure to apologize. Fellow Muslims must forgive each other. I want an open apology. I don’t want it to be closed or alone. People later what do you think about me,” said Choki.

6 Reasons Switzerland Must Be Included in the Bucket List: Not Just Mount ‘Toblerone’