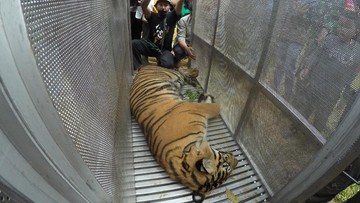 a Tiger at the Naples zoo, Florida, the United States was shot dead by officers on Wednesday (29/12) last night. The tiger was shot after biting a janitor’s arm through his cage.

Authorities said the eight-year-old male Malayan tiger bit the janitor’s arm who was suspected of “stroking or feeding” the tiger.

“Both are illegal and dangerous activities,” the Collier County sheriff’s office said in a statement on Facebook AFP on Sunday (2/1).

“Initial reports suggest that the tiger grabbed the man’s arm and pulled him into the cage after the man crossed the barrier and put his hand through the tiger enclosure,” he added.

The first officer to arrive at the scene “kicked the tiger’s cage and tried to get the tiger to remove the man’s arm from his mouth but the deputy was forced to open fire at the tiger.”

Officers stated that after being shot, the tiger retreated to its enclosure and did not move.

Meanwhile on the Naples zoo website on Thursday (30/12) it was reported that the zoo, located in Florida, USA, was closed for investigation. His party also reported that the staff is now in the process of healing and is being accompanied by a counselor.

It is known, the cleaning officer in this incident was in his 20s. He was seriously injured and has been rushed to the hospital.

While the Malayan tiger named Eko is known to have been part of the collection of the Naples Zoo, Florida, USA since two years ago.

The Malayan tiger is classified as an Endangered species on the International Union for Conservation of Nature (IUCN) Red List.

Elsewhere, this incident sparked dozens of comments from netizens calling for the zoo to be closed. Some netizens also criticized the cleaners for their actions.

“So some idiot has taken the life of a tiger? Very sad,” said one netizen in the comments column uploaded by the Naples Zoo about the closure.

Meanwhile, other netizens said that the action was taken because there was no other choice.

“If it’s a member of your family.. whether it’s safe or not, you will be very angry if the officers don’t do anything… They’re damned if they do and damned if they don’t,” wrote another netizen.

Persebaya Ahead of Fighting Arema: Regret Sadness is Enough

The Miracle of First Breastfeeding: A Special Gift from Mother for Baby | Republic of Online