Feature: The Weasel Must Play! Here are 7 JRPG Games Worth Waiting for in 2022 | GameBox 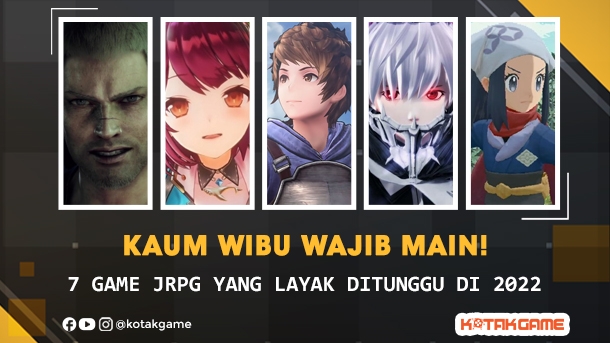 Only a few more days until 2022 and 2021 end with the development of the game industry improving. Not inferior to the previous year, 2022 is expected to be able to bring more advanced developments to every game industry, especially in releasing the latest titles. Including the JRPG genre that is constantly present for the satisfaction of its fans. Also read this:

» New Year Must New Game! Here’s the January 2022 Game Release Schedule
» Big Discounts and Worth Playing! 7 Best Games to Buy on Steam Winter Sale 2021
» Awesome and Must Play! 7 Best Games that deserve to be in the Game of the Year 2021 category!
» GTA 6 Info Too Old? Here Are 7 Similar Games Worth Playing While Waiting For GTA 6!
» Cool and Must Wishlist! 7 New Games Announced at The Game Awards 2021

There are various cool JRPG game titles that are ready to be launched in 2022, while at the same time generating hype among players. This time the KotGa crew will review 7 JRPG games worth playing that will come in 2022. Curious? Check out the following review!

Since it was first announced, Stranger of Paradise: Final Fantasy Origin has taken fans of the franchise by storm. Even the protagonist, Jack, is often the subject of memes, which makes the game’s popularity even more peaked. The latest entry that has a plot relationship with the first Final Fantasy series, presents a different gameplay from other series in general, which combines RPG with Soulslike elements. Considering this game is handled by the developer behind Nioh and Ninja Gaide, namely Team Ninja with Square Enix. Stranger of Paradise: Final Fantasy Origin is slated for release on March 18, 2022 for PC, PS4, PS5, Xbox One, and Xbox Series platforms.

2. Atelier Sophie 2: The Alchemist of the Mysterious Dream

Gust, as a game developer, has finally brought back the mysterious world of the Atelier series, by launching a sequel to Atelier Sophie. Titled Atelier Sophie 2: The Alchemist of the Mysterious Dream, this game takes the setting between the story of Atelier Sophie and Atelier Firis, which when viewed from the trailer seems to carry the concept of being trapped in a isekai. Sophie and her partner are trapped in a dream world, Erde Wiege and are on an adventure with their new friends. The sequel also adds several features such as a new minigame, character models, combat system, and a new alchemy system. Atelier Sophie 2: The Alchemist of the Mysterious Dream is slated for release on February 25, 2022 on PS4, Switch, and PC.

Remember the mysterious game from the former staff behind the Shin Megami Tensei series? None other than the game in question is Monark. Even though it was worked on by the staff of the JRPG game made by Atlus, Monark was actually developed by Furyu Corporation and released by NIS America for the Western version. This game carries the concept of a JRPG with a turn-based strategy-style combat mechanism. The visual concept also reminds players of the Shin Megaten and Persona series, which are thick with darkness. Here, players are tasked with solving strange mysteries that occur at the Shin Mikado Academy school. In order to save other friends, the player must enter the Otherworld, which is filled with creatures that rule the darkness. Monark is set to release on February 22 on PS5, PS4, Switch, and PC.

Minimum age in Moto3 has changed, this is Marcel Schrotter's opinion

Erick Thohir Asks for Additional State Capital of IDR 7.7 T for BUMN in 2023