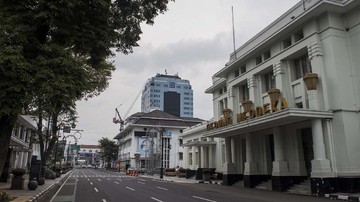 At 00.00 WIB, traffic conditions in the area were still congested. In addition, the public also packed the sidewalks of the highway, starting from the Asia Afrika Building, to the Bandung Square area.

“At 00.00 WIB it will be there woro-woro to the community to immediately disperse to their respective homes,” said Head of Bandung City Satpol PP Rasdian Setiadi, quoted from Between.

Satpol PP officers to police and TNI officers restricted the movement of people from Jalan Braga in order to minimize the increase in crowds on Jalan Asia Afrika.

Then, the police told the public to immediately disperse through loudspeakers at the security post.

Just at the turn of the year, the line of vehicles on Jalan Asia Afrika barely moved. Some residents also set off fireworks.

Meanwhile, the traffic flow in the surrounding areas such as Jalan Lembong, Jalan Merdeka, and Jalan Naripan is not as congested as on Jalan Asia Afrika.

The road which was previously closed since Saturday (31/12) night was closed, now it is reopened to parse vehicles and people who have dispersed from Jalan Asia Afrika or Bandung Square.