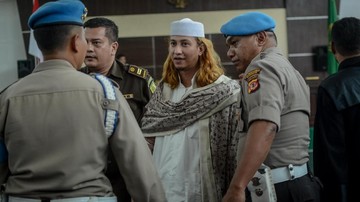 Through the Twitter account @humaspoldajbar, the police said that the investigator’s meeting with Bahar was aimed at providing a Notice of Commencement of Investigation (SPDP).

In this case, the official account of the West Java Regional Police which has a blue tick replied to a tweet submitted by a citizen. They voiced the hashtag #PolicePelukKadrun on Twitter.

The hashtag was widely discussed after a video circulated showing West Java Police investigators chatting casually with Bahar bin Smith in a room.

In the video, Bahar is seen talking while holding a cigarette in his left hand. They discussed a video that allegedly dragged Bahar into a new case.

He said that he was indeed spreading hatred in the video. However, the target object is hatred of injustice and injustice.

Bahar then mentioned the name of the Army Chief of Staff, General Dudung Abdurachman, who he suspected had insulted religion.

Still in the video clip that was circulating, several police officers then shook hands with Bahar. One member who wore a shirt that read ‘Ditreskrimum’ also hugged the controversial speaker.

Through a separate statement, the West Java Police Chief Inspector General Suntana said that his party had upgraded the status of handling cases of alleged hate speech containing elements of ethnicity, religion, race and intergroup (SARA) by preacher Bahar bin Smith into an investigation.

He stated that the police had also submitted a Notice of Investigation Commencement (SPDP) to Bahar at his residence in the Bogor area on December 28.

News : Despite Many Unanswered Questions, Matrix Resurrection Will Be The Last Film in the Matrix Series! | GameBox