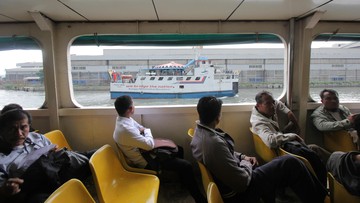 Ferry fare across the Port of Kayangan, Island Lombok to Poto Tano Port, Island Sumbawa up 15 percent from January 1, 2022.

The tariff increase is based on the Decree of the Governor of NTB Number 550-776 of 2021 and the Decree of the Board of Directors of PT. ASDP IF (Persero) Number KD.130/OP.404/ASDP-2021 Concerning Fares for Crossing the Kayangan-Poto Tano Crossing in the Province of NTB.

“The tariff adjustment has an increase of 15 percent for Kayangan-Poto Tano and will take effect on January 1, 2022,” said Head of the NTB Provincial Transportation Service H Lalu Moh Faozal in Mataram, as quoted by Antara. Between, Monday (27/12).

Faozal said that discussions on the increase had been carried out for the last six months. Initially, the increase came from the proposal of the Kayangan River Lake and Crossing Transportation Entrepreneurs Association (Gapasdap) which was submitted in July 2021.

Gapasdap Kayangan Poto Tano requested that the Kayangan – Poto Tano crossing fare be adjusted to an increase of 25.5 percent from the basic fare. This is because the operational costs of ships have increased, while crossing fares have been stagnant in the last five years.

Based on Gapasdap’s request, the Transportation Service of the NTB Provincial Government formed a discussion team for the adjustment of the tariffs for the Kayangan-Poto Tano crossing, consisting of the Transportation Agency, ASDP, Gapasdap, Organda, as well as academics from the University of Mataram (Unram).

“From that process, we held discussion meetings approximately four times. We also asked for calculations from Unram academics, so that from the Gapasdap proposal for an increase of 25.25 percent, it could finally be suppressed so that the increase in the adjustment was agreed to be 15 percent of the basic rate taking into account the power buy people,” he explained.

According to Faozan, the fare adjustment for the Kayangan-Poto Tano crossing will be accompanied by an increase in services on the crossing route. Ship entrepreneurs, continued Faozan, are committed to providing Clean, Healthy, Safe and Environmentally Friendly (CHSE) services and services.

“They will always operate the ferry in accordance with the Minimum Service Standards (SPM) for Crossing Transport, and always apply health protocols for the convenience of passengers,” he said.

The head of Gapasdap Kayangan-Poto Tano Iskandar Putra revealed that the last adjustment of the fares for the Kayangan-Potoano crossing was made in 2017. In fact, operational costs have increased.

He revealed that subsidized fuel prices for ships fluctuate every month based on world oil prices. In addition, the increase in the dollar exchange rate has an impact on the high cost of ship maintenance (docking) and the cost of ship parts.

This is added with the obligation of the ferry transportation company to pay for shipwreck removal in accordance with PP Number 15 of 2016 concerning Standards and Types of Non-Tax State Revenues applicable at the Ministry of Transportation (PNBP).

Then, insurance costs for removing shipwrecks and environmental pollution (Circular DITKAPEL of Sea Transportation Number UM 003/10/2/DK-16 concerning the application of insurance for the obligation to remove ship hulls for Indonesian-flagged ships), and manning provisions according to standards (KM 65 2016 concerning standards for Indonesian-flagged non-convection vessels (manning).

“With this tariff adjustment, of course our commitment from Gapasdap as the operator of the Kayangan – Poto Tano cross ship will further improve service standards for passengers and the community,” he said.

Kitabisa.com Together with Rumah Zakat Distributes Aid for Dian who Suffers from Tumor |nitoba.com