STY Peek at Thailand’s Strength Ahead of AFF Cup Final 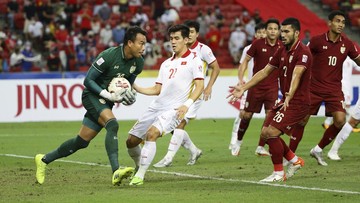 Shin Tae Yong was present at the National Stadium, Singapore, watching the second leg of the AFF Cup semifinal between Thailand vs Vietnam, Sunday (26/12), with his two assistants: Nova Arianto and Choi In-cheol.

“[Menyaksikan] Thailand match against Vietnam with Choi In-cheol and coach Nova. I analyze while doing intuition on the field,” wrote Shin Tae Yong via Instagram.

Leg 2 of the AFF Cup semifinals between Thailand vs Vietnam ended in a goalless draw. This result made Thailand successfully qualify for the 2020 AFF Cup final with a 2-0 aggregate win over Vietnam and meet Indonesia.

This is the fourth time Indonesia has met Thailand in the final of the AFF Cup after in 2000, 2002 and 2016. Thailand has successfully defeated Indonesia in the three finals of the AFF Cup.

“I have to say that [Indonesia vs Singapura] is the most incredible football game I have ever watched in my life! ”wrote Polking via Twitter.

Indonesia vs Thailand will undergo two final legs of the AFF Cup. Leg 1 will be held on Wednesday (29/12), while leg 2 of the AFF Cup final will take place on Saturday (1/1).

Mahfud: Police gave wrong information at the beginning of the Sambo case could be punished

Even When Losing, Big US Companies Still Leave Russia