It took Gardner six seasons to win the Moto2 world title. His career path is not easy. The start of his adventure in the category intermediate even most of it was spent in the back row.

After working hard to improve skill racing and regular practice, the son of MotoGP legend Wayne Gardner began to find a bright spot. It was the 2020 season where the Australian starlet showed improvement.

In his second year with the ONEXOX TKKR SAG Team, Gardner managed to pack two podiums, including one inaugural win in Portugal, and one pole position. He also sits in sixth place in the final standings.

Ahead of 2021, Gardner was signed by Red Bull KTM Ajo. Joining one of the top teams in Moto2, his performance is getting better. Immediately kicked off the Qatar series opener, and transformed into a strong challenger.

Although his number of wins is less than that of his main rival and teammate Raul Fernandez, Gardner is ahead in terms of points. He also won the Moto2 world title, despite finishing 10th in the Valencia finals. 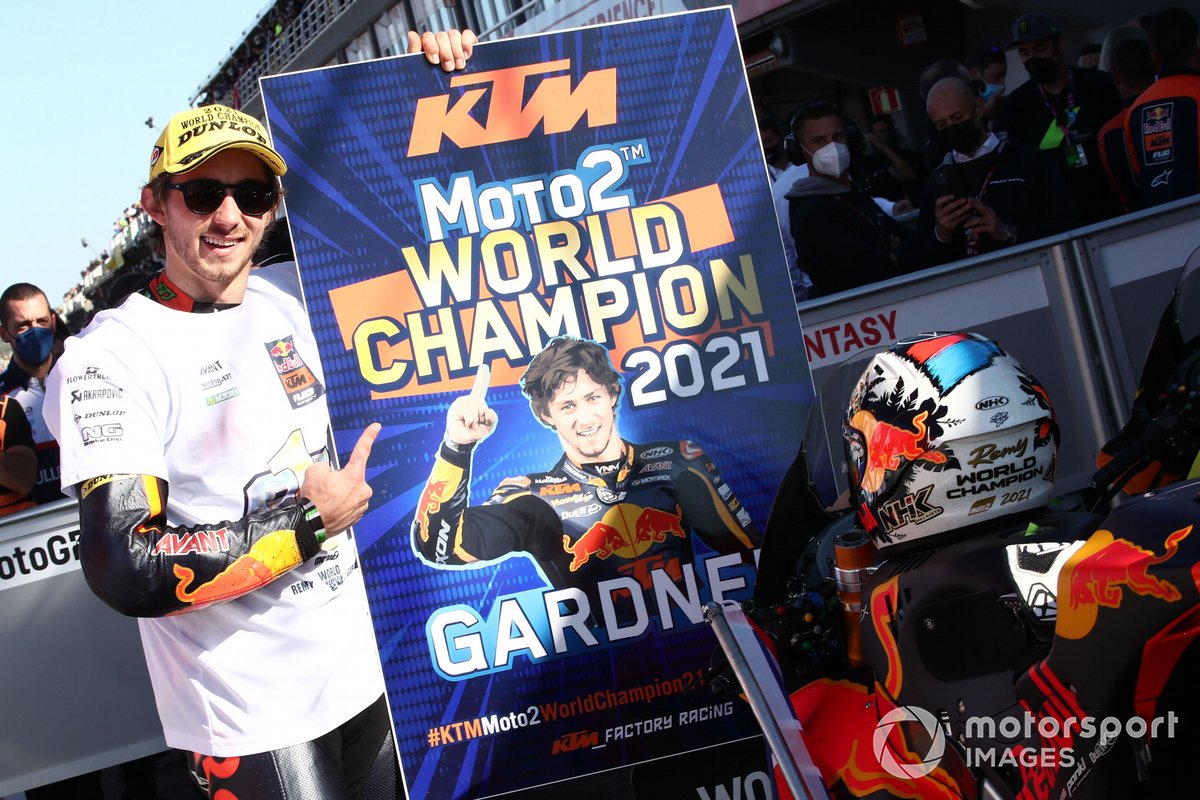 “It was a great, really amazing day,” Gardner said Speedcafe.

“I was surrounded by all my family there, also my boyfriend’s family, friends, my father. It was an amazing day.

“Glad to see dad in farm park and it tastes so amazing.

“It’s definitely an amazing thing, maybe the best day of my life, isn’t it?

“It’s great to be surrounded by friends. Those memories will live with me forever.”

Remy Gardner will open a new chapter of his racing career when he navigates MotoGP 2022 with Tech3 KTM Factory Racing. Interestingly, the racer will partner up again with Raul Fernandez.

Meanwhile, the success of becoming world champion led Gardner as the eighth youngest rider to win a Moto2 title, at the age of 23 years 263 days, behind Alex Marquez (23 years 194 days).

Plus a collection of six wins in the category intermediate, Gardner also became the second most successful Australian driver, behind Kel Carruthers (7 wins).

And despite losing in total wins, Gardner matched Fernandez’s accomplishments for the podium -climbing affair. They both did it 12 times.

Indonesian SMEs Want to Reach the World, Experts Ask to Focus on the Domestic Market

US: ‘All Options Considered’ to Punish Myanmar Junta for Execution of Activists