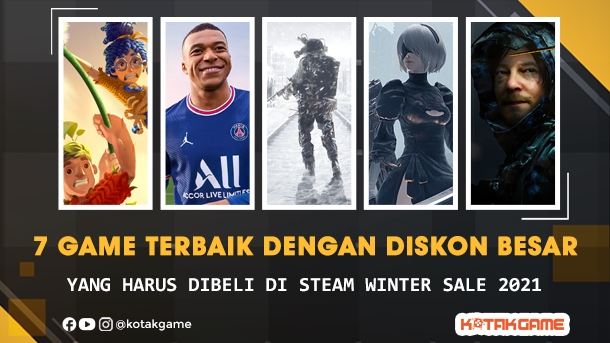 Nataru’s winter or holiday season has arrived. Not a few e-commerce specifically for gaming held a number of attractive promos or offers during the end of the year. Including Steam, one of them, which is currently holding the 2021 Steam Winter Sale. Most major game titles get extraordinary discounts. Ranging from 20% to 90%.

» Internet Cafe Kids Game! This is an online PC game in Indonesia, which is still full of fans!
» Awesome and Must Play! 7 Best Games that deserve to be in the Game of the Year 2021 category!
» GTA 6 Info Too Old? Here Are 7 Similar Games Worth Playing While Waiting For GTA 6!
» Good at Playing Shooting? Here are the 7 Best PC Shooter Games in Indonesia 2021!
» Cool and a Must Wishlist! 7 New Games Announced at The Game Awards 2021

This time, the KotGa crew will recommend the 7 best games worth buying at the 2021 Steam Winter Sale, with big discount offers. Curious? Check out the review below!

Developed by Hazelight Studios and released by EA, It Takes Two is now being discussed again after being awarded as “Game of the Year 2021” at The Game Awards 2021. This game tells the story of two couples, Cody and May who want to divorce. Her daughter, Rose, intends to improve her parents’ relationship by making dolls that look like them. Equipped with unique and interesting gameplay, It Takes Two can be played by two players on one screen. This game is now priced at a 50% discount during the 2021 Steam Winter Sale.

Like It Takes Two, Deathloop was also nominated for the “Game of the Year 2021” category at The Game Awards 2021. Despite losing, this game has actually won awards such as “Best Game Direction” and “Best Art Direction”. Developed by studio Arkane, which has worked on Dishonored and Prey, Deathloop successfully delivers shooting gameplay as gamers desire. Players are required to solve a murder mystery with a variety of very valuable weapons. Deathloop is now priced at a 50% discount during the 2021 Steam Winter Sale.

The Metro series is said to almost never disappoint fans of action horror games. Metro Exodus is one of them. In this game, players will be transported to the year 2036 after the nuclear war. Some people still survive and live in the ruins under Moscow, precisely under the tunnel on the Metro. Players must survive poison, mutated creatures, and experience horror while there. Carrying the concept of a first-person shooter with an emotional plot, Metro Exodus is a game worth playing during Nataru’s vacation. This game is now getting a 67% discount during the 2021 Steam Winter Sale.

Hajj Pilgrims Violate the Prohibition of Ihram, What Are the Consequences? | Ihram

Pernat: Joan Mir Likely To End Up At Honda