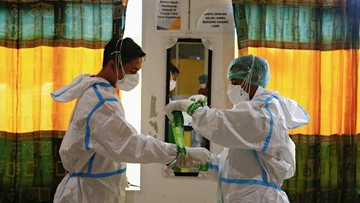 Corona virus positive caseCovid-19) varian Omicron increased again in Indonesia. Now there are 30 cases after experiencing the addition of 11 patients. All of them come from foreign travelers.

However, the Covid-19 Handling Task Force does not plan to change the rules regarding state officials who are not obliged to isolate at Wisma Athletes after returning from abroad.

The following is a summary of events and information regarding the development of Covid-19 cases in Indonesia in the last 24 hours.

Positive cases of the Omicron variant of the corona virus in Indonesia increased to 30 as of today, Sunday (26/12).

“There is now 30 information in total per day,” said the Director of Prevention and Control of Direct Infectious Diseases at the Ministry of Health, Siti Nadia Tarmizi, Sunday (26/12).

Nadia said the 11 new cases were imported cases from many countries, such as Saudi Arabia, Turkey, the United States, Malaysia, the United Arab Emirates and Nigeria.

The independent international agency Global Initiative on Sharing All Influenza Data (GISAID) said that Indonesia was included in the 86 countries that had reported the Omicron variant of Covid-19.

Epidemiologist from Griffith University, Dicky Budiman, said that the mutation of the SarS-CoV-2 variant of the Delmicron virus was a hoax that was born from a random theory.

According to him, there is currently no marriage between the two variants. What exists, he continued, is recombination in Brazil between Gama and its derivatives or subvariants from Delta.

“It’s a hoax, you have to be careful, Delmicron was born from a conspiracy or theory that connects and links Delta and Omicron,” said Dicky through a voice recording received by CNNIndonesia.com, Sunday (26/12).

Microbiologist and Biology Lecturer, Padjadjaran University, Mia Miranti also doubts that the Delta and Omicron variants can exist in a person’s body.

If a virus infects a person, usually one of the dominant mutations will infect, not a combination of the two variants.

“It is impossible for both of them to infect the same object at the same time. Whichever comes first, he will control the object,” said Mia to CNNIndonesia.com via written message, today.

The Covid-19 Handling Task Force does not plan to change the rules regarding quarantine for echelon 1 government employees, including members of the DPR who have just returned from abroad.

“Nothing has changed, everything is in accordance with SE 25 of the Task Force,” said the Head of Health Handling of the Covid-19 Handling Task Force, Alexander K. Ginting, when contacted by CNNIndonesia.com, Saturday (26/12).

In the circular, echelon 1 government employees, including members of the DPR, may self-isolate at home for 10 days after returning from abroad.

The rules regarding quarantine became a polemic after DPR member Mulan Jameela, her husband Ahmad Dhani and their families underwent self-isolation at home after returning from Turkey. In fact, ordinary citizens are required to quarantine in hotels at their own expense. Other government employees were also placed in Wisma Athletes.

Of that number, there were 4,113,049 people who were declared cured. Patients who recovered from Covid-19 infection increased by 148 today.

News : Failed to Win PMGC 2021, Zuxxy: I Don't Think We Will Retire Since We Are Still Young! | GameBox

News : Even though Indonesia is only represented by 1 team for the Valorant 2023 Franchise… | GameBox

Submission of Ulos as a UNESCO Intangible Cultural Heritage