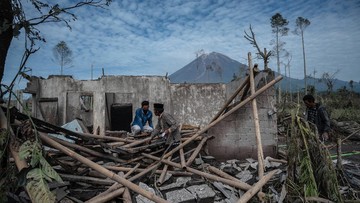 soap opera filming Forced to marry Tuan Muda (TMTM) in refugee camps for affected victims the eruption of Mount Semeru received public attention. One of them is a letter of application for a permit from the Lumajang Regency Government, East Java, which was spread on social media.

The letter, written as a disposition sheet, and the head of the Regional Secretariat of the Lumajang Regency Government. The applicant was PT Verona Indah Pictures, the production house (PH) that worked on the soap opera.

In the letter, the subject column said “application for permission to shoot soap operas in refugee areas and around the location of the eruption of Mount Semeru.”

Then in the instruction column it says “ACC, coordinate with BPBD and Dansatgas (Task Force Commander).” There is no signature on the letter.

Lumajang Regent Thoriqul Haq admitted that the production house had submitted a permit application to the Lumajang Regency Government, as stated in the letter in circulation. However, he denied having given permission to shoot.

Thoriq claims that there are still licensing stages that have not been fulfilled by the TMTM soap opera production team, namely the coordination stage with the Dansatgas who is responsible for locations affected by the eruption.

“There is a permit application process from the PH or the producer who will carry out the shooting of the soap opera, yes. But that the decision to be allowed through a letter or permit, the mechanism is there, not yet. And there is no licensing decision regarding the shooting,” said Thoriq, Friday ( 24/12).

Thoriq said that he was currently investigating who the Lumajang Regency Government facilitated the filming of the soap opera to issue the permit application.

“Who facilitated all of this? That is what we are currently investigating internally, as well as our evaluation at the regional government regarding the facilitation of filming this soap opera,” he said.

For this incident, Thoriq also admitted that he was angry and disappointed. Moreover, the shooting was carried out in the midst of grieving residents, and showed scenes of hugs that were inappropriate to be shown to residents.

“Of course the public is angry, yes, I am also angry and disappointed, moreover the scene is a scene that should not be shown in a refugee camp,” he said.

The Commander of the Operation Control Center for the Semeru Task Force, Major Inf Muhammad Tohir, said that his party did not give permission to the PH soap opera TMTM to shoot at the refugee camp for victims of the Semeru eruption.

Tohir said that although the PH party had received approval from the Lumajang Regency Government, the soap opera production team also had to coordinate with him.

“I received the information that the ACC was approved by the Regent. The disposition was approved but had to coordinate or report to the Dansatgas,” said Tohir.

On the other hand, PT Verona Indah Pictures’ Line Producer, Dwi Sunarso Lobo, who produced the soap opera, said that his party had obtained a permit from the local government.

“The permission must come from the local government, volunteers and the surrounding areas. Now if we don’t coordinate the logic, how can we shoot or work there,” said Lobo to CNNIndonesia.com, Wednesday (22/12).

Jokowi Asks Mall Managers to Strictly Use Care to Protect