US Market Problem for Young Drivers

After a year off due to the Covid-19 pandemic, the Motorcycle Racing World Championship returned to the United States (US) in 2021. In the premier class, MotoGP, Marc Marquez (Repsol Honda) established himself as the ruler of the Circuit of The Americas (COTA) Austin, Texas.

Unfortunately, the hosts do not have a mainstay in the premier class. Last season’s US riders in the Motor Racing World Championship were only in the Moto2 class, Cameron Beaubier and Joe Roberts (left and right of main photo).

Starting from Moto2 2022, the US will have one other driver, namely Sean Dylan Kelly. Together with Beaubier, Kelly will strengthen the American Racing Team. Meanwhile, Roberts will go down with the Italtrans Racing Team flag. 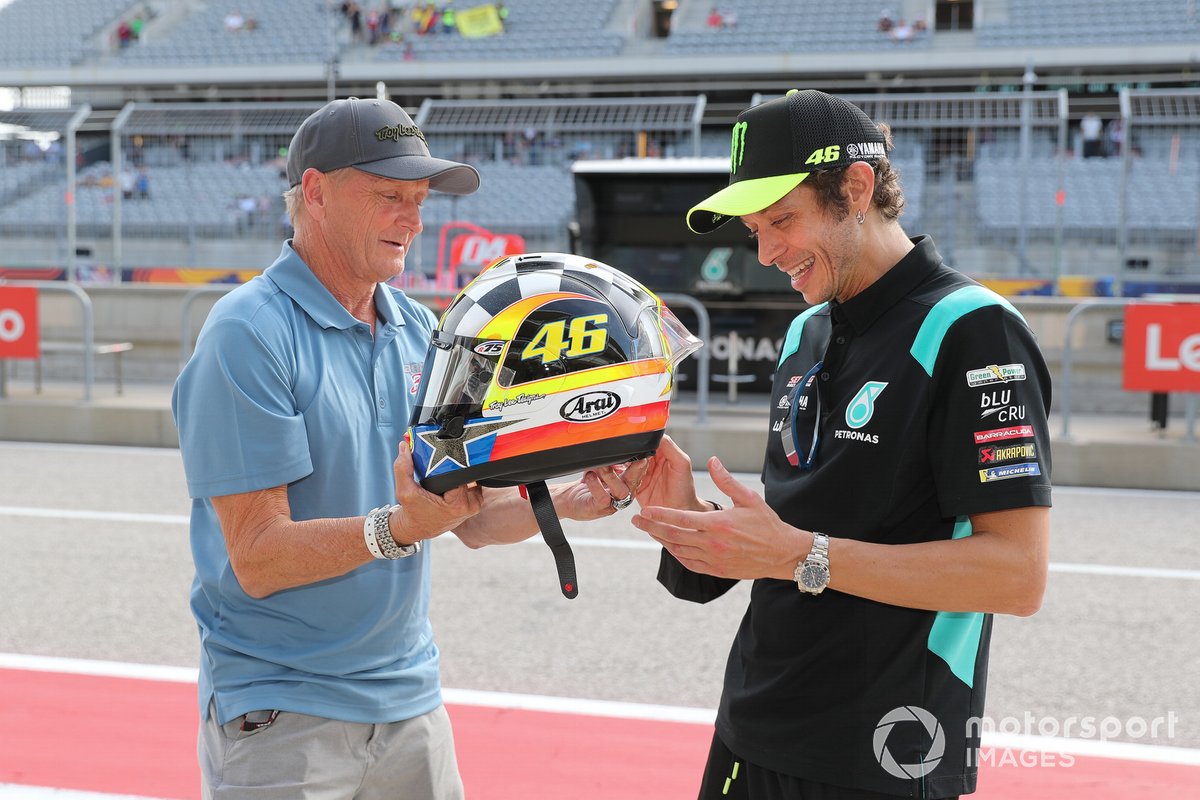 Kevin Schwantz gave a souvenir in the form of a helmet to Valentino Rossi, Petronas Yamaha SRT, a MotoGP legend who idolized him.

Even though he already has three riders in the middle class for next season, it has not satisfied MotoGP legend from Uncle Sam’s country, Kevin Schwantz.

The man from Texas, 57 years old, was the 500cc world champion, the premier class of the Motorcycle Racing World Championship before 2002. Schwantz became the premier class champion before being followed by Kenny Roberts Jr. (500cc 2001) and the late Nicky Hayden (MotoGP 2006).

In 2016 it was for the first time since 1975 that there were no US drivers in the grid the highest class of the Motorcycle Racing World Championship.

“The American market is no longer attractive. All national championships in our country are orphans,” said Schwantz, who was active in the 500cc class between 1986 and 1995.

“Unlike in Europe, in our country there is no championship for children. We don’t even have the right motorbike to train. Nor is there a manufacturer officially involved in competing in the superbike championship in our country.”

The racer, who had matured in the AMA Superbike before participating in the Grand Prix, explained that at first he was officially supported by Yoshimura Suzuki Superbike in 1987. Schwantz was finally able to win the 500cc class title six years later.

“Anything happened because at that time Suzuki was able to sell the GSX-R for US$75,000 in our country every year. Now that doesn’t exist anymore,” said the winner of 25 Grand Prix, 51 podiums and 29 pole position in the 105 starts in the 500cc class.

“Right now, American drivers looking to get into motorcycling are practically relying on money from their wealthy parents or waiting for a miracle from sponsors to make the big leap to the Motor Racing World Championship.”

Conditions in the US can finally be seen from the performance of Roberts and Beaubier in Moto2 last season. Roberts only finished in P13 in the final standings while Beaubier was in status rookie two levels below. Neither of them was able to finish on the podium from 18 rounds of Moto2 2021.

Opportunities to go down in MotoGP for racers from the US had opened up from World Superbike (WSBK). Garrett Gerloff, who played for the Yamaha satellite team at WSBK, once participated in the 2021 MotoGP to replace the injured Franco Morbidelli (Petronas Yamaha SRT).

Although next season he will still strengthen the GRT Yamaha WorldSBK Team in WSBK, Gerloff’s hopes of being able to join MotoGP to represent the US remain open. He is still 26 years old and his performance in WSBK is also not too bad, finishing P7 in the final standings with 228 points.

These Three Groups May Use Government-Owned Quarantine Facilities, Tourists Are Not Included |nitoba.com