0
SHARES
0
VIEWS
Share on FacebookShare on Twitter
The title of the anime “School Days” is already familiar to the weasel’s ears, especially those who have watched anime for a long time. Not without reason, the Romance anime sparked a huge controversy because of its explicit content.

To celebrate Christmas, one of the Japanese television stations, Abema TV, will again broadcast School Days on the evening of December 24. This also marks the sixth year that this television station has broadcast the controversial anime on Christmas Eve, where in the previous year the character Kotonoha appeared as a Virtual Tuber (Vtuber). 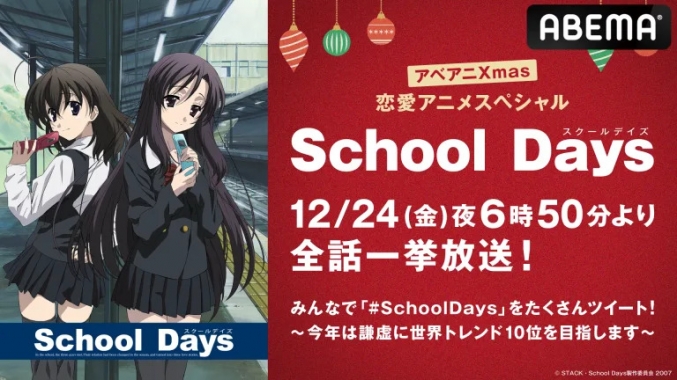 »Not Over, Comic Oshiete! Galko-Chan Even Disappears Without Notice!
» Due to Over-Demanding, Some VTubers Start Experiencing Fatigue and Stress
» Japanese Netizens Attack Article That Says Disney Instigated The Woman With Glasses!
» Trusted To Ship Loads Of Hundreds Of Consoles, This Man Just Sold The Load And Gambled!
» A Reseller Arrested For Selling PS5 and Nintendo Switch Entrusted by His Acquaintance!

Christmas Eve itself is an integral moment in the Visual Novel where there are 2 Happy Endings for 2 different heroines, namely Kotonoha Katsura (Christmas Eve) and Sekai Saionji (With Honesty). Both endings are considered quite difficult to obtain because if the player makes a mistake, it can trigger a Bad Ending called “Bloody End”.

School Days has become a joke when someone asks for romance anime recommendations. Plus the “Nice Boat” meme that was born due to a Japanese television station choosing to show a video of the ship instead of the last episode of the anime, due to a deadly incident that has similarities to that episode.