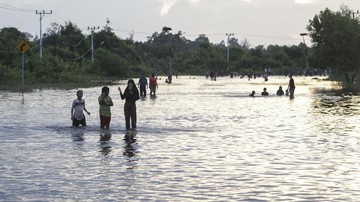 According to BNPB, flooding in the area designated as the new State Capital (IKN) was caused by high rainfall intensity and accompanied by high tides (ROB). As a result, river water that should flow into the sea is blocked and overflows into residential areas.

According to a report from the local BPBD, Abdul said, the flood affected 101 families and 101 houses and 1 prayer room were flooded.

Abdul said the flood lasted about 1 to 2 hours. Shortly after that, the water began to recede following the ebb and flow of the sea.

“The characteristics of the flood disaster in Sepaku District are that it will not take long, or in other words, the flood will soon recede, the water level will soon fall along with the lowering of sea water,” Abdul explained.

Even so, the local BPBD appealed to the public and related parties to remain vigilant. This is because, according to the tidal forecast from the Meteorological Station Class I Sultan Aji Muhammad Sulaiman Sepinggan – Balikpapan in the period 15 – 23 December 2021.

“It is estimated that the maximum tide height is between 2.6 meters to 2.8 meters,” he said.

“BNPB appeals to the community, it is hoped that the community can prepare themselves by increasing preparedness, among others by understanding evacuation routes and areas that are safer from flooding,” he added.

News : [VIDEO] Want Your Laptop to Last? Avoid These 7 Habits So Your Laptop Doesn't Get Damaged Quickly! | GameBox